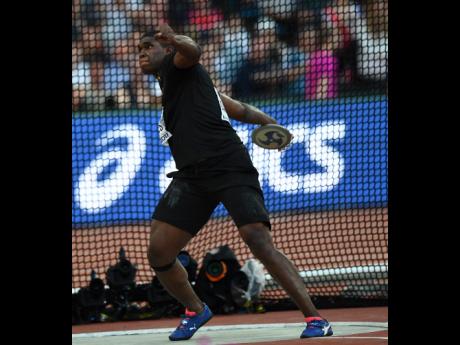 Ricardo Makyn
Fedrick Dacres competing in the final of the Men's Discus Throw at the IAAF World Championships at the London Stadium in London, England on Saturday.

Dacres' personal and season best mark of 68.88m had him as the second best thrower heading into the championships, but the 23 year-old could not replicate his form on the circuit, as he struggles to get his usual purchase on the disc, during an interesting final inside the London Stadium.

"I can't say I am disappointed, I just never got a good pull, I didn't really feel any of my throws. I have improved from the previous time. The last time at a World Championships I came seventh and now I am fourth and last year I didn't make the final," Dacres reasoned. "I am improving and I am thankful for that, so I am not trying to make any excuses but I think I am building on what I have and hopefully I will continue to do better."

"Today (Saturday) I was fluent in the ring but I didn't feel the pull on the disc and the one time I felt the disc pull in my hand, it went in the cage, he said in reference to his third attempt. "I am a bit disappointed, because based on that throw, I thought I would have been up there, but it just didn't happen."

Dacres will now turn his attention to the rest of the IAAF Diamond League season where he is still in the hunt for the Diamond Race title in the event as well as the World University Games.