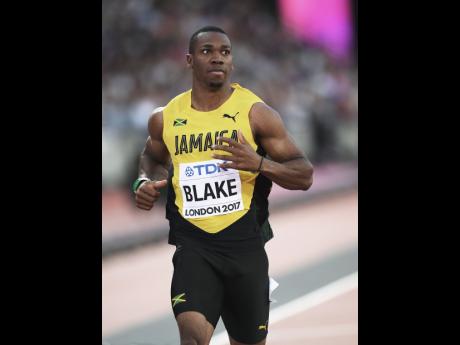 Jamaican sprinter Yohan Blake was left extremely disappointed having finished outside of the top three positions in Saturday's men's 100m final at the World Championships at the London Stadium.

Blake, the 2011 world champion, crossed the line in fourth position with a time of 9.99, with his training partner Usain Bolt, 9.95 finishing in third place behind winner Justin Gatlin, 9.92 and another American, silver medal winner, Christian Coleman.

Blake, who arrived at the final in good form and full of confidence agrees that he should have left the track with a podium spot but vows to continue pushing for improvement.

"I have to give God thanks, I am happy for the medallists but I am very disappointed with myself, I should have won a medal here," Blake said. "I don't know where I went wrong, I think my start was off a bit but nevertheless, I want to congratulate Usain on his last race, it was a historic one and I am happy to be in it."

"I was focused, maybe I was too focused, but I just did not react well but nevertheless, I know I have a couple of years to get it right," Blake added. "I should have medalled right there."

This was the first time since 2008 that a Jamaican and specifically, neither Bolt nor Blake was winning the 100m gold medal at a major championship.

"It's a very disappointing time for the country but we got a medal and it's not the end of the world. We know we will have to rise up and even I myself, I know I have to play a serious role," Blake continued. "We all have to step up to the plate."