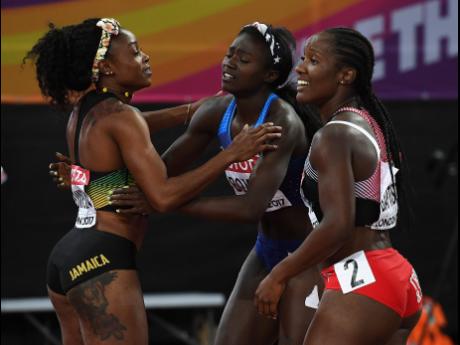 For the first time since 2005, Jamaica has been kept off the top of the medal podium at a major championship in the 100m events.

There was no Jamaican winner in the men's 100m and, last night, with double Olympic champion Elaine Thompson finishing fifth in 10.98 seconds, no winner in the women's 100m.

For fans of the 'Sprint Capital' of the world, it is a bitter pill to swallow, a rude awakening of what might become in the continued absence of intervention.

Thompson did not make much of it, but a pre-race vomiting incident had her rivals worried about her, with silver medallist Marie-Josee Ta Lou of the Ivory Coast, who ran 10.86, noting, "I am sorry for her (Thompson). I think before the race, she was sick. I hope she gets better and I have respect for her. She is a big, big athlete!"

The Jamaican was still struggling to find the answers after what was her first non-top-three finish since June 2014.

"I don't know what happened. I have to go and watch the replay. I stumbled and tried to get it back. I wasn't getting the form I wanted to and I tried not to panic," said a smiling Thompson, who also alleviated fears she had suffered an injury mid-race. "I am healthy. I came out here brave, strong and ready to go, but that didn't happen. This defeat will push me harder and help me to work harder."

This was Thompson's fourth loss in 35 races over 100m.

Yesterday's third day of competition inside the London Stadium actually started well enough for the Jamaicans, who will today have four athletes competing in finals.

Rich in quarter-mile history, Jamaica has had five different finalists in the men's 400m at these championships. The last one was Jermaine Gonzales, who finished fourth in 2011 in Daegu, South Korea.

The island, however, has never had two men qualifying for the final of the one-lap event at the same championship, an accomplishment achieved by the ever-improving pair of Nathon Allen and Demish Gaye.

Allen glided to a second-place finish behind Bahamian Steven Gardiner, 43.89, with a personal-best mark of 44.19 seconds in his semi-final, and Gaye matching that effort, finishing second to Botswana's Isaac Makwala, 44.30, also in personal-best fashion with a time of 44.55 seconds.

Allen, for the second straight day, was taken straight to the medical area for a check-up, but was later cleared of any issues.

The final will take place tomorrow at 9:50 p.m. (3:50 p.m. Jamaica time), with Allen drawn to compete in Lane Six beside South African Wayde Van Niekerk, the world record holder, and Gaye lining up in Lane Eight.

There will also be two Jamaicans in the 110m hurdles final, with Olympic champion Omar McLeod and Beijing 2015 silver medal winner Hansle Parchment both securing lanes in the medal round.

"I remember in 2015, I had just turned pro. I was paying my dues. I got a sixth place and it was, honestly, like a gold medal for me, so this year is like a redemption. I just have to go out there and focus on me, have fun and execute," said McLeod after his all-qualifiers-leading 13.10 seconds win in last night's semi-final.

McLeod has won all but one of his 10 races this season and will enter the final as the strong favourite for a second straight gold medal at a major international championship.

Parchment has been less convincing this season, but has a history of showing up when it matters. He is looking for another big-race run in tonight's 9:30 p.m. (3:30 p.m.) final.

"When I come out, I tell myself that I am the best. I know I need to show that, so I keep motivating myself every time I step on the track because I know Jamaica is looking for me to give them good performances. I want to surprise myself with strong times as well," said Parchment.

Novlene Williams-Mills, 51.00, was the fastest Jamaican qualifier in women's 400m and the fourth fastest overall, with Chrisann Gordon, 51.14, Shericka Jackson, 51.26, and Stephenie-Ann McPherson, 51.27, all comfortably advancing as well.