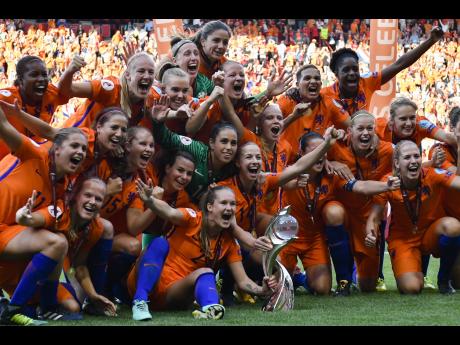 AP
Players of the Netherlands celebrate with the trophy after defeating Denmark at the Women's Euro 2017 final soccer match in Enschede, the Netherlands yesterday. (AP Photo/Patrick Post)

Striker Vivianne Miedema scored twice yesterday as the Netherlands beat Denmark 4-2 to win its first Women's European Championship title and set off a huge party among thousands of orange-clad fans.

Long after the final whistle and award ceremony, the players - many clutching bottles of Champagne - danced through the corridors of the FC Twente stadium chanting "Champions!"

The success of the Dutch women's team is in stark contrast to the country's men, who failed to qualify for last year's European Championship in France and is struggling to reach next year's World Cup in Russia.

Netherlands coach Sarina Wiegman said she hoped the victory and success of the tournament on home soil would promote the game among Dutch girls and prove a platform on which to build greater success for the women's team as it prepares to start qualification for the World Cup later this year.

It was a disappointing end to the tournament for Denmark, which knocked out six-time defending champion Germany in the quarterfinals and reached its first final after losing five previous semifinals. A penalty shootout win over Austria after extra time in the semifinals left the Danes looking tired in the second half, allowing the Dutch to control play.

The end of the German reign as European champion after more than two decades at the top is a sign that the game is improving across the continent, Wiegman said.

"Germany was champion and nobody else could get close," she said. "Today we changed that. Actually Denmark changed it and we continued today."

"Sometimes you can't choose what you want. You just get it," said Danish striker Nadia Nadim, a refugee who fled Afghanistan for Denmark after her father was killed by the Taliban. She now plays for the Portland Thorns in the U.S. National Women's Soccer League.

"It was tough at the start, but then things started going well," the forward told Dutch broadcaster NOS. "Today the first half was so chaotic, Denmark was good, and it was fantastic that we could show in the second half that we can play good football."

The frenetic match was played in front of a sell-out crowd of more than 28,000 fans, including Denmark's Crown Prince Frederik, at FC Twente's stadium in the eastern city of Enschede. Also in the crowd was Marco van Basten, the star of the Dutch men's team that won the 1988 European Championship.

Nadim, who overcame so much to reach the final, said she was disappointed with the loss, "but maybe in a week or so we can be proud of our performance and happy that we won a silver medal, but right now it feels like we lost a gold medal."