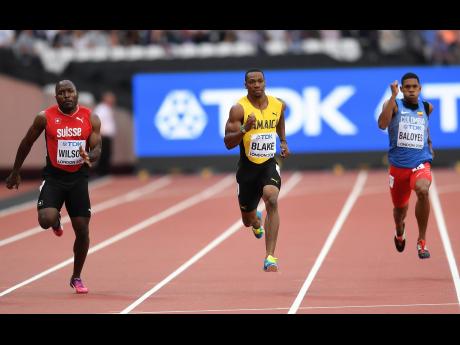 Ricardo Makyn
Jamaican Yohan Blake (center) powers down to the line to take his heat in the men's 200m event in a time of 20.39 yesterday.

Sprinter Yohan Blake says he remains confident heading into tomorrow's 200m semi-final despite Saturday's disappointing fourth-place finish in the 100m final at the World Championships inside the London Stadium.

The Jamaican also believes that Wayde van Niekerk's decision to attempt the 200m-400m double will improve his chances against the impressive South African, who enters the half-lap event as the favourite for the gold medal.

Blake, who clocked 9.99 seconds to finish behind winner Justin Gatlin 9.92, Christian Coleman 9.94 and Usain Bolt 9.95, added that it did not take him long to get over his 100m setback, and that he is now fully focused on a successful 200m campaign.

Historically, the second-fastest man in the event, Blake has gone as fast as 19.97 seconds in the 200m this season and feels that he is in with a strong chance of making it on the podium.

"It was hard the day after the 100m final when I woke up and it was still real, but my coach told me to put that behind me and come out here and run free," said Blake.

"I am confident. I was ready for that 100m, but it's a case where when you are in those races, you cannot make any mistakes, and they got two steps on me, and I was not able to come back from that," he added.

Blake noted that he thinks he has an edge over his good friend, van Niekerk, who is competing in both the 200m and the 400m sprints.

"I know the double is not easy, we saw LaShawn Merritt try it and it took a toll on him because the 400m is no joke. He (van Niekerk) has a lot of guts and heart. He is my friend, and I just wish him all the best," Blake said. "Is there an advantage for me? Yes, a little one of course, but still you have to pay attention to everyone in the field."

Blake yesterday booked his spot in the 200m semi-final with a comfortable 20.39 win in his heat.

He will be joined there by fellow Jamaican Rasheed Dwyer, who was third in his heat with a time of 20.49. Warren Weir failed to advance after a 20.60 fourth place finish in his heat.

"It went well, I give God thanks, I have just been trying to stay focused after that disappointment in how I ran the final of the 100m, because I know I am in better shape than that. I just want to keep my mind free, keep doing what the coach tells me to do, and go out there and run," he said.