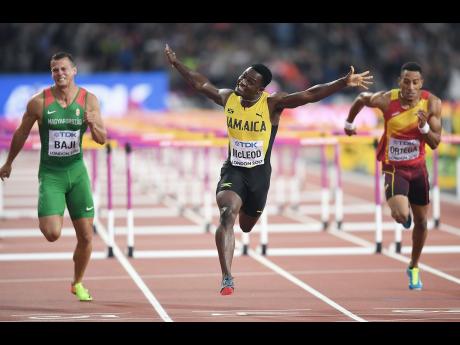 Ricardo Makyn
Omar McLeod celebrates after winning the 110m hurdles in 13.04 at the IAAF World Championships at the London Stadium in London, England yesterday. 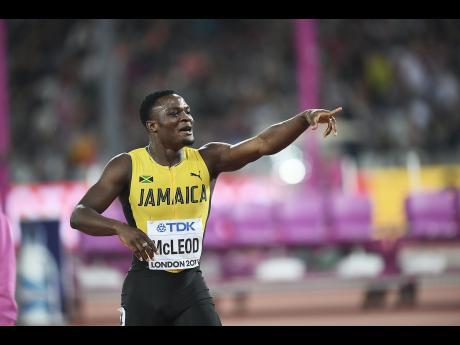 Having conquered the sprint hurdling world, freshly minted Omar McLeod will be turning his attention elsewhere, and he hopes it will start with a leg on Jamaica's 4x100m relay team at the IAAF World Championships in London.

The 23-year-old is also looking to broaden his range at the international level and is planning a raid on the shorter sprints in the coming season.

McLeod, the reigning Olympic champion, showed his power and poise to top the podium in 13.04 seconds, beating Russia's Sergey Shubenkov, 13.14, who is one of several athletes competing as neutral and Hungary's Balazs Baji, 13.28 to the finish line. McLeod's teammate Hansle Parchment was eighth in 13.37.

With his world title joining the Olympic and World Indoor title he won in 2016, McLeod, who says he still has ambitions of breaking the 110m hurdles world record of 12.80 seconds, feels it's time to give himself another challenge and informed that he will be focusing on the 100m and 200m next season.

"Why settle? I want to be historic. I am not just about hurdling. World Indoor, Olympic, World Champion; I have done it all for hurdling, so I just have to break that world record now and just experiment a little more in other events," McLeod declared.

First, he wants to help Jamaica to another gold medal in the 4x100m relay on Saturday.

"I have that in mind so hopefully I will get a chance to go out there and help Jamaica to another gold medal," McLeod said last night inside the London Stadium.

"If I don't run it, then that's fine, but I really wanted to come out here and do my job first."

"I am trying to stay fresh. I love representing my country and whatever I can do I will do it," he added.

McLeod ran the first leg in his professional group's 38.17 seconds win at the Austin Clyde Littlefield Texas Relays in April.

The event was won by Venezuelan Yulimar Rojas, 14.91m ahead of Caterine Ibarguen (Colombia), 14.89m and Kazakhstan's Olga Rypakova, 14.77m.

Three of the four Jamaicans in the women's 400m are through to the final.

Stephenie-Ann McPherson, 50.56, was second in her semi, while Novlene Williams-Mills, 50.67, and Shericka Jackson, 50.70; survived a nervous wait after finishing third and fourth respectively in their semi-final and out of the automatic spots before advancing as the fastest 'losers'. Chrisann Gordon missed out after running third in her semi-final in 50.87.

All three women's 400m hurdles competitors are through to the semis. Ristananna Tracey won her heat convincingly in 54.92 and is the second-fastest qualifier to the semis. Rhonda Whyte, 55.18, was second in her heat, while Leah Nugent, is also through despite her fifth placed 56.16 seconds run.

Warren Weir failed to advance after his fourth place 20.60 seconds run, which prompted him announcing that he was representing the country for the final time.