Blackwood eager to get going in Test series 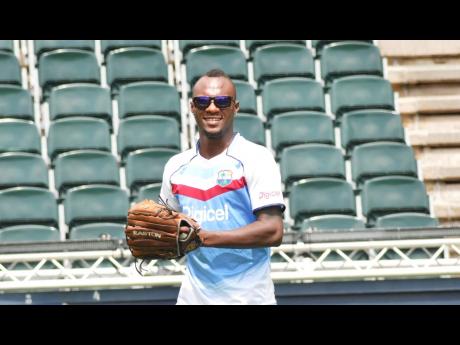 With two half-centuries in four innings on tour, in-form stroke-maker Jermaine Blackwood says that he feels in great touch as he gears up for the opening Test against England later this month.

The right-hander struck exactly 50 on Sunday's opening day of the three-match tour against Kent here, following on his 59 against Essex in the first game of the tour at Chelmsford.

"I think all the boys are ready. We have been training pretty hard and everybody is excited about the first Test match."

He added: "[It's] my first time to England, first time playing here. Different conditions but learning as the days go by. [I'm] putting in a lot of work with the coaches [and] getting used to the conditions."

Blackwood lost his place in the Test squad recently, failing to find favour in the recent three-Test home series against Pakistan.

However, he opened the current tour with an attacking half-century against Essex and followed up with another handsome effort against Kent, though the innings was a patient one, requiring some graft.

The 25-year-old said that conditions last weekend demanded that he make adjustments to his usually aggressive approach.

"[Last Sunday] was a perfect example. The ball was swinging around, so I knew I had to trust my defence and just play each ball on its merit," Blackwood said.

"The pitch had in a lot of moisture, so the ball wasn't coming through like at Essex, so you had to wait a little longer. You had to play the ball right under your eyes. I just have to spend a little more time out there in the middle."

It was his 70-run fifth-wicket stand with Shai Hope in challenging conditions that pulled West Indies around from 78 for four on the first morning.

Hope top-scored with 57 to also extend his healthy form on tour, which has already brought him 155 runs from four innings, and Blackwood praised his junior teammate for the effort.

"Shai was batting good. He was giving me some good advice when I first came out to bat," Blackwood said.

"At the time when I went out there, we had just lost a wicket and I just told Shai we need to build a partnership and once we can get a partnership together, we know the runs are going to come."

West Indies face Derbyshire in their third three-day tour match, starting tomorrow. The day/night affair will be in preparation for the first Test at Edgbaston beginning August 17, which will be the inaugural 'pink ball' Test in England.