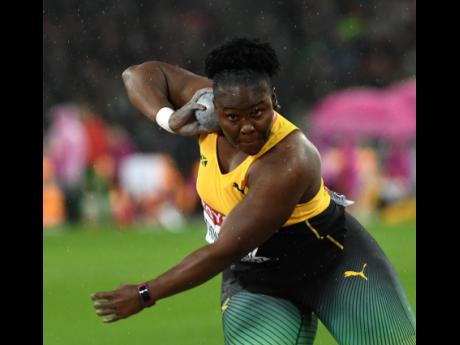 Ricardo Makyn
Danniel Thomas-Dodd had a best throw of 18.91m in the Women's shot put but missed out on a medal, finishing fourth.

Despite barely missing out on a medal in the women's shot put, Jamaica's Danniel Thomas-Dodd says she is leaving the World Championships in London fully satisfied with her history-making efforts.

The 24-year-old was already the first Jamaican woman to qualify directly to the final of the event and came close to a podium finish with a strong series that saw a best distance of 18.91 metres, which left her with a fourth place finish.

Thomas-Dodd actually entered the final round of throws in third position but lost that spot after Hungarian Anita Marton produced a big 19.49m to leapfrog her and American bronze medallist Michelle Carter, 19.14m and into second place. The event was won by Lijiao Gong, 19.94m from China.

The former Frome Technical sprinter-turned-thrower said she is pleased with her performance and is now hoping to advance her development.

"I was happy. Honestly, I knew these ladies were more experienced than I am, and I was happy that I was able to hold my own against them. These ladies have been on the circuit, they have been competing at this level, and they know what's it like to do so, and for me to finish the way I did against such a tough feel, I am really happy with my performance," Thomas-Dodd told The Gleaner, who added that her showing is a confirmation of her abilities following her national record resetting 19.15m mark posted in early June.

"It's definitely a confirmation. I talk about consistency, and for me, it shows how consistent I am and the consistency I have throughout the season and moving forward. I definitely have a lot more to offer," she added.

Despite coming so close to a medal, Thomas-Dodd, who recently completed her master's degree in sports and recreation management from Kent University in Ohio, says there is no disappointment on her part.

"Honestly, I would like to have been in the medals but I can't be too greedy, it's only my second World Championships, I am still young, a lot of these ladies are going out and we represent the next generation of throwers, so there is more for me to offer, so I am not disappointed. I am right where I want to be."

Thomas-Dodd was the youngest top four finisher in the final, with Gong and Marton both being 28 and Carter approaching her 32nd birthday.