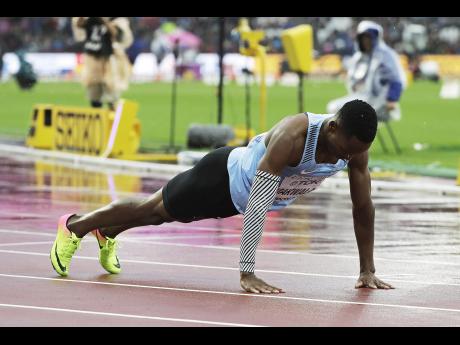 AP
Botswana's Isaac Makwala does press-ups on the track after finishing a men's 200m individual time trial during the World Athletics Championships in London yesterday.

Turns out Isaac Makwala is healthy. Really healthy, in fact.

So healthy, that after getting called back to the stadium for a surprise command performance at the World Championships yesterday, he ran two 200-metre sprints the first all alone on the track qualified for the final, and even dropped to the ground and pumped out five push ups near the finish line.

"I'm running with anger," Makwala said. "I have no point to prove because I know myself. I'm fit. I know I'm a great athlete. I believe in myself."

The Botswanan sprinter's plight became the cause cÈlËbre of the championships when he threw up before the start of the 200m preliminaries Monday, was determined to be among the handful of athletes afflicted with the stomach flu, and was barred from the stadium for 48 hours to lower the risk of infecting other runners.

All along, Makwala insisted that he was not sick. One of his managers, Sander Ogink, told The Associated Press that it was simply a case of nerves.

"As you probably know, athletes throw up when they're nervous," Ogink said.

But the IAAF held firm, and Makwala was scratched from both his 200m heat and the 400m final, where he could' have been the main challenger Tuesday to the eventual gold medallist, Wayde van Niekerk.

After further review and another visit from the doctor, the IAAF determined that while it couldn't do anything about the 400m Makwala showed up to the stadium for it on Tuesday but was turned away it could try to right one wrong. He was asked back for yesterday's action.

He opened the proceedings on a dreary, rain-drenched night by lining up in Lane 7 with nobody else on the track. His goal was to beat the slowest non-automatic qualifying time from the day before 20.53 seconds and after he crossed in 20.20, he dropped and gave 'em five, snapped off a salute to the crowd, then hustled off to get ready for the semi-finals.

Back out in the rain two hours later for that race, Makwala finished second to earn his berth in today's final.