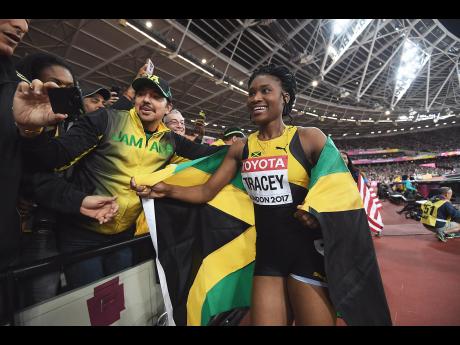 Ricardo Makyn
Ristananna Tracey is greeted by Jamaican fans after her bronze-medal run in the women's 400 metres hurdles final at the IAAF World Championships in London yesterday.

Wilson is one of the most highly regarded coaches in Jamaica and has been at the forefront of Jamaican teams to major international championships for more than a decade. He has also personally coached a number of athletes, who have represented Jamaica at the World Championships and Olympics, and is the coach responsible for the most athletes on this current team.

Tracey, who ran a personal best 53.74 seconds to finish behind American pair Kori Carter, 53.07, and Dalilah Muhammad, 53.50, at the London Stadium, not only secured her first podium finish at the senior international level, but also the first for Wilson, as far as individual medals are concerned.

It's a success that means a lot to Tracey and one that takes on more significance for her, given the struggles she has experienced over the past few years.

"Danniel Thomas-Dodd is my roommate, and I saw that she lost the bronze medal on the last throw, and when she came home I told her I was happy for her and her performance, and I was like 'Danniel, what if I gave my coach his first medal?' and she told me I would do it," Tracey shared. "I came out here and put it on the line because he is always encouraging me and motivating me and telling me that I should believe in my abilities because I am strong and I can do great things."

Wilson, Tracey explained, was crucial in her preparation and mental approach for the final.

"Experience teaches wisdom and I think I have had a lot of experience, so I sat and talked to myself and said, 'Rista, you can be on that podium'. I have been going through the rounds easy. At first when I saw the lane draw, all my rivals were behind me, and I was saying that I wanted to see them because I don't want them to get any advantage over me, but I remember going to my coach, and he told me that I am stronger than all of them and that I should go out there and run my own race and I will be on the podium," Tracey shared.

"I followed his advice and came out here and ran my own race, and I am victorious at the end, and I am very thankful for that," she added before going through the race strategy that herself and the coach, agreed on.

"I ran the first 200m really hard because I know I can maintain because I still have the 800m strength in me," Tracey noted. "He (Wilson) told me once I come off the eighth hurdle and I am in touch, I should not panic, I should not worry, just drive straight for home, and if it means diving to the line, do exactly that, and I think I came out and dug deep after that last hurdle."

It's exactly what she did, powering away from Zuzana Hejnova on the final two hurdles to secure Jamaica's sixth World Championships medal in the event.