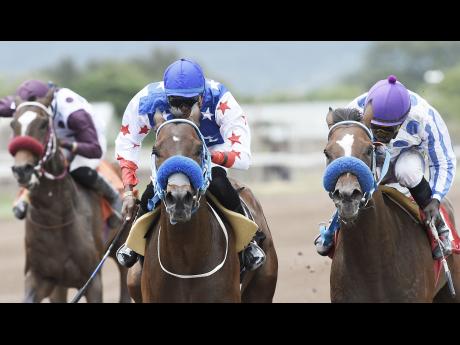 THORNHILL MISS gets a grand chance to return to winning ways when she takes on seven rivals in tomorrow's opening event of the Sunrise-6 at Caymanas Park.

The 1600 metres race should develop into a two-way battle between the selection, trained by Gresford Smith, and the Anthony Nunes-trained BLUE TRADITION, two horses who ran in several Classic races earlier this season.

To be ridden by Wesley Henry, THORNHILL MISS finished quite well when she placed third by three-and-a-half lengths to Zi Beast on August 7 in a 1000 metres race. She is surely of a better class than the majority of the field and will have too much early pace for BLUE TRADITION, who is expected to be running on in the latter stages of the race.

LUNAR ROCKET appears to be at a stage of rapid improvement, and this four-year-old filly will have to be caught in race two. She slammed a strong field by 11 lengths, going 1200 metres on July 22, clocking a fast 1:12.1 behind splits of 22.2 x 45.2. I expect her to go all the way again and win ahead of DYSFUNCTIONAL, who is very light at 49.0kg.

A very poor eight-horse field will face the starter in race three, an 1820 metres event for maiden three-year-olds. Any number can play in this race, and I am selecting DALLAS, who, in his only race on July 22, finished nearer last than first behind KD Flyer over 1000 metres straight. By Storm Craft - Danzig la Rae, DALLAS has been looking up at exercise since that race and could spring a surprise.

Race four looks tailored for SONG ON TRACK. The five-year-old mare takes a crack at another exercise riders event over 800 metres after being disqualified from first in a similar race on April 1. She has been exercising quite well since the start of this month and should make it a post-to-post affair ahead of MONEY MOVE who is drawn on the outside. Chris Mamdeen has the ride.

The two-year-olds take the spotlight in the day's feature, the Front Runner Dash over 1000 metres round, number five on the 11-race card. Trainer Richard Azan looks to hold the keys to this event in WOODHOUSE and CHRISTILANO. The latter, by Traditional-Kitsilano, is definitely faster and is tipped to make every post a winning one.

Exercise rider Mamdeen should close a double in race six aboard STORMONTHESEA. The six-year-old gelding is a cut above the rest of this $180,000 claiming field and should lead all the way from the outside draw.