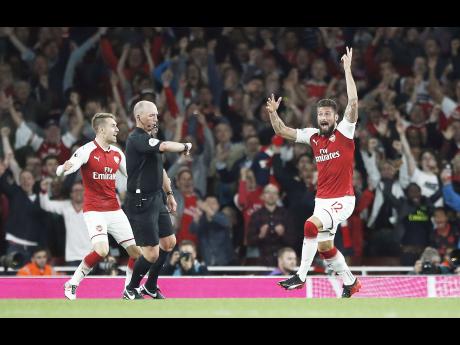 AP
Arsenal's Olivier Giroud (right) reacts and celebrates as referee Mike Dean (centre) says the ball has crossed the line for a goal during their English Premier League match between Arsenal and Leicester City at the Emirates stadium in London yesterday. Arsenal won 4-3.

Olivier Giroud completed an exhilarating comeback as Arsenal beat Leicester 4-3 yesterday to ensure Arsene Wenger's side opened the English Premier League with a victory for only the second time in eight seasons. Arsenal turned around the league's first Friday opener in the closing minutes at Emirates Stadium. After Aaron Ramsey levelled in the 83rd minute, Giroud sealed the three points with a header inside two minutes on an evening of thrilling attacks gifted by fragile defending.

Arsenal record-signing Alexandre Lacazette launched his Premier League career in style by heading in the opener after 94 seconds.

A predictable Arsenal implosion followed, with Shinji Okazaki and Jamie Vardy putting Leicester in front. Even after Danny Welbeck levelled on the stroke of halftime, Vardy restored Leicester's lead after the break.

But Leicester, which so astonishingly won the league in 2016, couldn't hold on for their first win at Arsenal since 1973. Instead, Wenger avoided a third consecutive season-opening loss at the start of his new two-year contract.

This was the perfect lift-off for Arsenal, particularly for Lacazette.

The first touch from the €60 million euros signing was at kick-off. His second was to meet Mohamed Elneny's cross with a powerful header past goalkeeper Kasper Schmeichel.

Lacazette, recruited from Lyon, savoured the moment, opening his arms out wide to take in the acclamation of his new home.

Arsenal's defence, though, was still on its summer break.

Just 160 seconds after Lacazette scored, Arsenal goalkeeper Petr Cech was picking the ball out of his net. Harry Maguire nodded Marc Albrighton's cross back into the path of Okazaki who headed Leicester City level.

Before completing a half-hour of the season, Arsenal was trailing. Again, Albrighton was the architect, and afforded far too much space to rampage down the left flank before crossing low for Vardy to turn the ball into the net.

How quickly optimism faded as Arsenal's enduring defensive flaws were exposed so soon. There was a lifeline for Wenger before half-time when Welbeck met Sead Kolasinac's cross to tap in an equaliser.