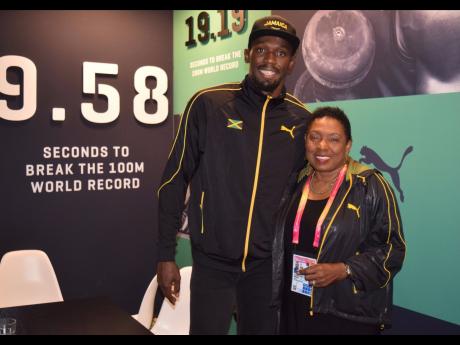 File
Minister of Culture, Gender, Entertainment and Sport, Olivia Grange, shared lens time with sprint legend Usain Bolt during a visit with members of Jamaicas track and field team at the IAAF World Championships in London.

The Minister of Culture, Gender, Entertainment and Sport, Olivia Grange, now visiting London for the IAAF World Championships, has met with members of the Jamaica Team and has told them that the country is still fully behind them.

"I have expressed to them my own continued support and that of all of Jamaica and encouraged them to keep working hard and to persevere despite the obstacles," Grange said.

The sport minister said that she was assured that team spirit in the camp is high in spite of some of the disappointments.

She said it should be remembered that the current team is mainly a young one and that there were indeed some achievements worthy of note to go with Omar McLeod's gold medal, Usain Bolt's bronze medal, Ristananna Tracey's courageous performance in the 400m hurdles which earned her and Jamaica's second bronze medal, and Danniel Thomas-Dodd just barely missing out on a shot put bronze.

"We had women in the 400m finals, two men in the discus finals ... one in the 5000m final, as well as a women's steeplechase finalist. And I believe we will pick up more medals in the relays that are to come."