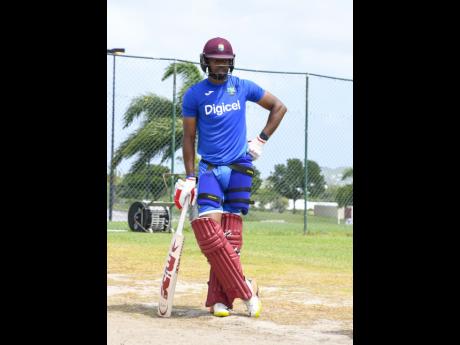 The right-hander notched 105, headlining an excellent batting effort by the Caribbean side which saw then end the day at the Derbyshire County Ground on an impressive 340 for three.

Left-handed opener Kieran Powell carved out 92 to run in to form while Shai Hope (69 not out) and Roston Chase (62 not out) fashioned unbeaten half-centuries, to reinforce their side's dominance.

Playing in their final tour game before the opening Test starting next Thursday at Edgbaston, the Windies batsmen made the most of the outing.

Opener Kraigg Brathwaite's lean run continued, however, when he was lbw to fast bowler Tom Milnes in the day's fourth over for three but Hope and Powell then took the attack to the hosts as the Windies reached 138 for one at the interval.

Hope, whose previous from has been patchy, struck 15 fours off 167 deliveries, putting on 153 for the second wicket with Powell who faced a mere 97 balls and counted 13 fours.

When Powell fell, Shai Hope joined his older brother to add a further 72 for the third wicket and keep West Indies on top.

Kyle Hope eventually perished, bowled by left-arm spinner Matt Sonczak, paving the way for the in-form Chase to punch his third half-century in as many outings on tour, in an unbroken 109-run partnership with Shai Hope.

Shai, who has been in fine touch, produced a patient knock which lasted 172 balls and included nine fours while Chase, in contrast, needed just 74 balls for his innings and struck nine fours.