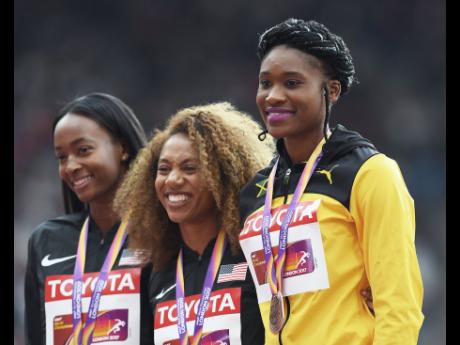 Ricardo Makyn
Ristananna Tracey (right) with her bronze at the medal ceremony for the 400 metres hurdles yesterday. At centre is gold medal winner, American Kori Carter, while at left is her compatriot, silver medallist Dalilah Muhammad.

After guiding Ristananna Tracey to their first medal at the senior global level, coach Maurice Wilson says he is pleased with the athlete's development, but underlined that she will only achieve her full potential if she continues to push herself towards it.

Wilson has been a crucial part of the national set-up as head coach and technical leader for much of what can be called the country's golden period of athletics success. He had, however, previously never coached one of his athletes to an individual medal at this level.

That changed when Tracey completed her comeback after a few tough years on the track; the highest point so far of a promise that was shown when she made last year's Olympic final.

Tracey stopped the clock in a personal best 53.74 seconds to claim bronze behind Kori Carter, 53.07 and Dalilah Muhammad, 53.50 both Americans, in the final of the 400m hurdles inside the London Stadium on Thursday, to secure the island's sixth World Championships medal in the event. Wilson said he was pleased with the medal's effect in lifting the spirit around entire team and believes the 25-year-old is still at the beginning of her cycle.

"In my mind, I believe she is one of the strongest runners after hurdles nine and 10, and I felt that once she was in contention, she would be among the medals, and fortunately, the tactics that we designed paid off for her," said Wilson in an interview with The Gleaner.

That strategy involved not following Carter's expected early pace and pushing hard off hurdle nine and although Tracey was nervous about having big names such as Muhammad and Zuzana Hejnova in lanes staggered behind her, Wilson said it was key to keep her calm and assured heading into the contest.

He is now hoping that Tracey will continue to push forward in her development and follow in the footsteps of other Jamaican stalwarts in the event such as Deon Hemmings and Melaine Walker, who won multiple medals including gold, at the world level.

"I think she has a lot of potential. Sometimes it's difficult to get athletes to believe in what you do, not that they don't want to believe, but it is sometimes a very gruelling task for them to be doing the same thing or preparing them week by week, so it takes patience, but I am happy for her success," Wilson said.

"Athletes tend when they start to become successful or when they are successful, think that the pathway is easier.

I am hoping that Rista will understand that 53 seconds is just the beginning of the road," Wilson noted.