Mullings : Age is just a number 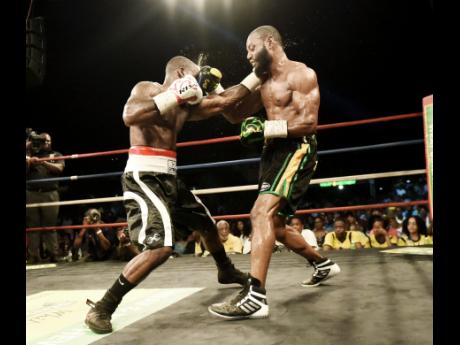 Newly crowned Wray and Nephew Contender Series Champion Sakima 'The Mauler' Mullings says that he still has a lot left to offer to boxing and aims to compete at the highest level for another number of years.

Mullings defeated Canadian Phil Rose in the competition's grand final last month and said after the bout that his conditioning was unmatched throughout the competition and in the island.

The 35-year-old said that his age means nothing in deciding how long he can continue in the sport and that he still aims to reach the heights of other top Jamaican boxers such as Nicholas 'The Axeman' Walters, if possible.

"At the end of the day, I believe that a boxer's age can't be judged chronologically," he said. "A boxer is like a car. You age based on how many miles are on the speedometer. You judge the age based on whether it's ever been in an accident. It's whether you've really been damaged or hurt in a fight. I see myself still as a young fighter and I believe that physically, I'm not damaged goods. I don't have a lot of miles on my speedometer and I've never been beat up. I've lost a fight before, but Sakima Mullings has never been beat up. I have very minimal wear and tear."

Mullings added that apart from still being in the physical shape he wants to be, his passion and hunger for excelling in the sport have also not waned.

"It's something I still want to do," he said. "I still love waking up and boxing. I still love training and going to the gym. My mind and my heart are still in it."

But Mullings said that although he expects to be around for the next few years, he does not intend to be around long enough to be considered "washed up".

"I also don't want to be one of the fighters that overstays their welcome and fights past their prime. Based on the years I have yet, I believe I have five years left in me, so I don't want to overstay my welcome," Mullings shared.