Pollard stars for Tridents in CPL 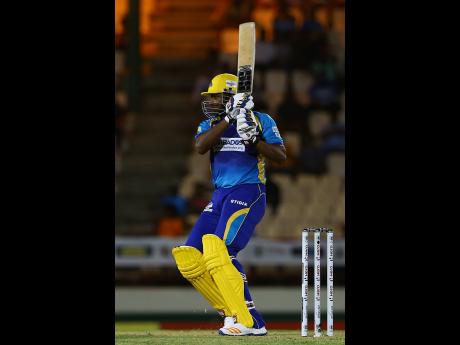 CPL T20 via Getty Images
Kieron Pollard of the Barbados Tridents hits a boundary during Match 8 of the 2017 Hero Caribbean Premier League between St Lucia Stars and Barbados Tridents at the Darren Sammy Stadium on Thursday.

Pollard was devastating in an unbeaten 83 off a mere 35 balls as Tridents, opting to bat first at the Darren Sammy Cricket Ground, amassed a tournament-high 196 for four off their 20 overs.

New Zealander Kane Williamson got his first decent score with a measured 46, while fellow opener Dwayne Smith chimed in with 36.

Seamer Kyle Mayers was the best Stars bowler with two for 30.

The adverse weather, which had also interrupted the Tridents innings, then returned to haunt stars and they were 129 for six in the 16th over 21 runs short of the par score of 150 - when the match was ended prematurely.

Sammy threatened to turn the game on its head with a scintillating unbeaten 60 after the top order collapsed but rain also put paid to his heroics.

For Tridents, it was their second win in three outings while inflicting Stars with a morale-sapping third straight defeat.

The Bridgetown-based franchise were given a solid start by Williamson and Smith who posted 72 off 55 deliveries.

Williamson faced 44 balls and struck five fours while Smith carved out three fours and two sixes in his 27-ball knock, which took the Barbadian past 7,000 T20 runs in his 299th match of the format.

Smith and Shoaib Malik, who got a first-ball duck, fell off successive deliveries with the score on 72 and when Williamson perished in the 14th over, Tridents were stalling at 94 for three.

However, Pollard then took the innings by the scruff of its neck, belting five fours and six giant sixes, as he added 52 for the fourth wicket with Nicholas Pooran (18) and a further 50 in an unbroken fifth wicket stand with Chris Barnwell (three not out).