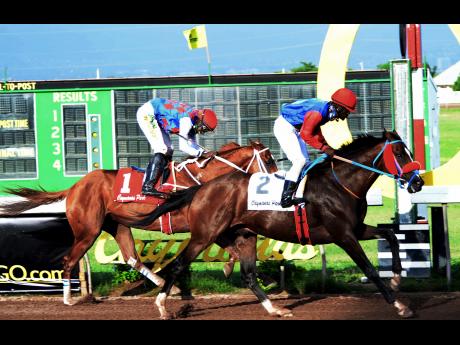 Jermaine Barnaby
SUPERLUMINAL (right) with Robert Halledeen up defeating WILL IN CHARGE (Shane Ellis) at Caymanas Park on Saturday, April 26.

TRAINER Gary Subratie has three runners in this afternoon's open allowance at 1500 metres - BRAWN, AWESOME DESTINY and BLUE DIXIE - gunning for the major slice of the $1.15m purse.

Whereas Subratie might have numbers on his side in the eight-horse field, the race will be decided on form and handicaps, which bring into play the duo of DWAYNE STAR and SUPERLUMINAL.

Subratie's BRAWN shares topweight 57.0 kilos with HOUDINI'S MAGIC, a tall task in a race expected to have sustained pace from start to finish.

BRAWN has gone up nine pounds from his last race, a near six-length loss behind HOUDINI'S MAGIC in the 1400-metre Eros Trophy a month ago. On the other hand, HOUDINI'S MAGIC will run 14lb heavier.

In addition to topweight 57.0 kilos, United States-bred BRAWN's habit of giving away lengths at the start will take a brave punter to stay in his corner at 1500 metres, hoping everything goes right for him after getting it wrong in his last two races.

BETTER OFF IN THE WEIGHTS

Subratie's other two other runners, BLUE DIXIE and AWESOME DESTINY, also importees, are much better off in the weights at 51.0 and 49.0 kilos, respectively.

BLUE DIXIE reports off a four-month layup and AWESOME DESTINY has been doing weird things at exercise since beating KALAMTA at 1820 metres last month. First, she bolted in a three-furlong gallop on July 30 and raced wide down the backstretch on Sunday when striding seven furlongs in 1:37.1. Using either horse will be a judgement call, similar to stablemate BRAWN.

Nicely in at the weights and bang inform are DWAYNE STAR and SUPERLUMINAL, both carrying 53.0 kilos. DWAYNE STAR was really comfortable when winning in 1:32.0 at Saturday's distance last time out. SUPERLUMINAL, however, is the more accomplished of the pair and gets a decent pull in the scale.

Last time out, SUPERLUMINAL carried 57.0 kilos and was run out of it close home by WILL IN CHARGE, who had 54.0 kilos in a very fast mile, 1:37.1. WILL IN CHARGE returned with bottom weight 50.0 kilos to beat grade one in Monday's Prime Minister's Stakes.

SUPERLUMINAL loves galloping out of the chute and, with 53.0 kilos, should be able to sit in any pace being set down the backstretch. Omar Walker enjoys either stalking or being just about on the lead with his mounts, making SUPERLUMINAL a perfect horse for his riding style.