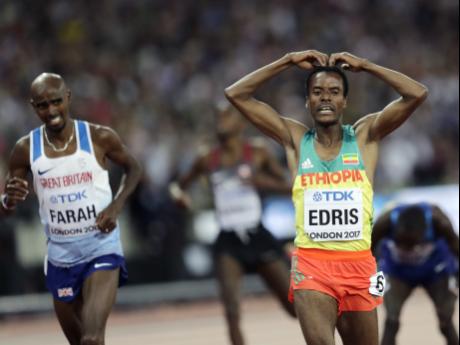 It was the familiar 'Mobot' celebration on an unfamiliar face.

Muktar Edris put an end to Mo Farah's dominance in the distance races at the World Championships yesterday, and he crossed the line doing the move that Farah made famous at the Olympics five years ago.

Edris out-kicked Farah down the stretch, beating the British runner at his own game in the final seconds of the 5,000 metres race.

"Mo has many victories, but now I have one. I am the new champion for Ethiopia," Edris said. "That's why I did the 'Mobot.' I am the next champion."

Farah won the long-distance double at the 2012 London Olympics. As he crossed the finish line in those races, he raised his arms and put his hands on the top of his head, creating a sort of "M'' shape. He's been using that pose ever since as he continued to rule the track by again winning the 5,000 and 10,000 at last year's Olympics in Rio de Janeiro.

He didn't have enough in his legs to get his arms up over his head this time, settling for silver and falling down on the track in exhaustion after crossing the line.

"I gave it all," said Farah, who was running on the track at a major championship for the last time. "I didn't have a single bit left at the end."

Farah, now 34 years old and a six-time world champion, knew the opposition would be gunning for him. And they did.

They boxed Farah in. They changed the pace of the race. They made him work hard, knowing that his 10,000 metres victory on the opening day of the championships would take something out of his punishing finish.

"I was highly prepared for this race, and I knew I was going to beat Mo Farah," Edris said. "After the 10km, he was maybe tired, so he did not have enough for the last kick. I was stronger."