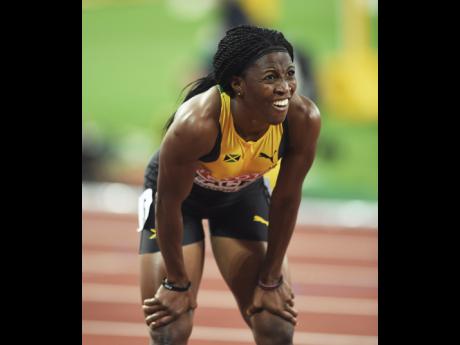 Experienced Jamaican sprinter Simone Facey shared that she and her teammates were told that Elaine Thompson would not compete in the women's 4x100m relay final at the World Championships just before they started warming up a couple of hours before the race.

Thompson, Jamaica's top female sprinter, was expected to feature in the final after sitting out the heat earlier in the day.

The Jamaican team of Jura Levy, Natasha Morrison, Facey, and Sashalee Forbes won the bronze medal in 42.19 seconds behind the United States, 41.82, and Great Britain and Northern Ireland, 42.12.

Facey said that she was particularly pleased with the medal, given the inexperienced nature of the team and the doubt placed around their chances prior to the final.

"I know it's not the typical four that people are accustomed to seeing for Jamaica, but I believe in these girls, and you can see the effort and talent. I can't complain because we came out with a bronze medal, so I am pleased," added Facey. "This medal is very special. It's a young team. A lot of people don't know these ladies, so just for them to come out here and get the job done, I am more happy for them than I am for myself because they are the future."

Team manager Ian Forbes said yesterday shortly after the final that he was advised that Thompson had some unspecified issues from which she had not sufficiently recovered.

Nevertheless, Facey said that she was grateful for the medal and was proud of the team's accomplishment.

"I am very grateful that I was able to come out here with a young team. I know a lot of people underestimated us tonight (last night) because it's a young team that we have, so I am happy that I was able to lead by example, go out there, gave it my all, and help us to a position where we could get a medal," she said.