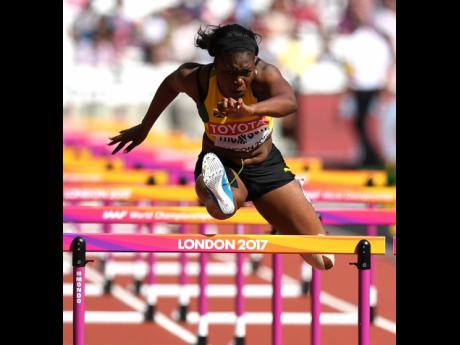 Sprint hurdler Yanique Thompson is hoping to continue her growth after narrowly missing out on a spot in the final of the 100m hurdles at the World Championships in London.

Thompson clocked 12.88 seconds for third place in her semi-final, missing out on an automatic qualifying spot and edged out from a 'fastest loser' spot by two-hundredths of a second to world record holder Kendra Harrison, who was third in her semi-final in 12.86.

Nonetheless, the former World Youth champion is counting her blessings, after making her senior international debut in a season when she not only continued her long struggle with a knee injury, but also fell and broke her wrist while hurdling.

"It's not a disappointment to miss the final because I have been through a lot this season, and I am grateful for the opportunity. I am still young, and I have a lot of time to fix whatever issues I have and come back stronger," Thompson said.

"This season was the season to do my rehab and get back in shape. Honestly, I wasn't expecting to even make this team, and this season proves to me that I am extremely talented. I came into the championship running 13 seconds, and I came out, made the team, and ran 12.69, and I really did not do a lot of work to run that time. If I put in the work and the injuries calm down a little, hopefully, I will become better," said Thompson. "As my coach said, I have not done much to get to this point, so he will work on my weak areas and stay focused.

"Somehow I found the faith and went to trials, and I wasn't expecting to make the team. I told myself I was as good as anyone out there and went and gave it my best.

"It was a very good experience being at the senior level, but I think I should have made more use of the experience. I feel disappointed with my second race. Normally, after my first race, I tend to get better, and it felt too casual for me," Thompson added. "Going so close to qualifying makes it even worse because I know that if I tried to be more aggressive, I could have made the final, but somehow in the race, it just did not happen."

The youngster says that she is determined to make the most of her talent and develop into a top sprint hurdler.

"My talent taught me a lot. I see that I am talented, and I don't want to waste it. I get injured a lot, and I always try to work my way back. I want to have a season where I am not feeling any pain to see how well I can run, but I have had the knee injury since 2013. It's getting better, but not fully. I fell over the hurdle this season, and that was a disappointment for me because I broke my wrist, and I was going to call it a season," said Thompson.