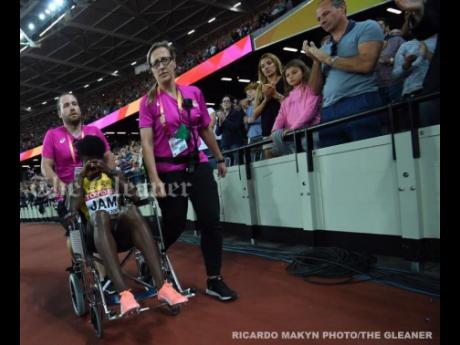 Anneisha McLaughlin-Whilby being carried from the field in a wheelchair after suffering an injury on the second leg of the women's 4X400m relay.

Jamaica suffered another disappointment at the 16th IAAF World Championships in London today, after second leg runner Anneisha McLaughlin-Whilby pulled up in the final of the women's 4x400m relay and failed to finish.

The event was won by the United States in a world leading time of 3:19.02.

The Jamaicans were led off by Chrisann Gordon who was the second runner to make the change over to a second leg athlete.

McLaughlin-Whilby was in a good position on the backstretch when she began holding onto her hamstring.

The other members of the team were Novlene Williams-Mills and Shericka Jackson.

The failure of the Jamaican women came a day after sprint superstar Usain Bolt pulled up on the second leg in the final of the men's 4x100m relay.