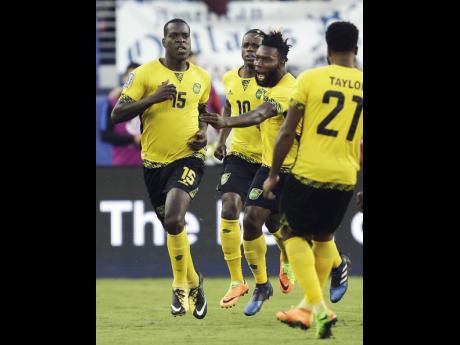 AP
Jamaica's Je-Vaughn Watson (15) celebrates with teammates after scoring a goal against the United States during the second half of the Gold Cup final in Santa Clara, California, on July 26.

Whenever I see the national flag, the black, green, and gold, fluttering in the sky, or hear the National Anthem, Jamaica, Land We Love, ringing in my ear, my heart beats faster, filled with pride and passion.

And although I respect them and wish them well, although I understand the reason why they were born elsewhere, and although I acknowledge the ties, and will forever do so, whenever I see a far-removed Jamaican, especially those far removed with only one thing in common and those who have to be more or less coerced to wear the colours or stand for the anthem, my heart skips a beat.

They are the ones who have to face the music the morning after, so to speak.

They are not the ones who, like the son of the man who invited me to dinner at his home in Leicester in England in 1984 and pleaded with me to write that Jamaica should bring his son here, and other English-born Jamaicans, to play for Jamaica.

He left us together for a minute, in which time, the boy said to me, in the Queen's English, and accent: "Mr Becca, please don't pay daddy any mind. I don't even know where Jamaica is located."

That is why my heart overflowed with joy a few weeks ago when Jamaica, the real Reggae Boyz, went into the United States of America, contested the Gold Cup football tournament, and against all the odds, reached the final after beating Canada 2-1 and Mexico 1-0 before going down 2-1 to the USA in a final to remember.

The team of born Jamaicans, some of whom play professionally in America, and coached by Jamaican heroes, Theodore Whitmore and Warren Barrett, surprised all concerned with their improved skill and determination.

The Jamaicans were not as gifted or as dazzling as teams like Real Madrid or Barcelona, but they gave their all in every match. It was, particularly in defence, one for all and all for one, with the players protecting each other as they defended in groups with all their hearts.

The passing was not the best, neither was their running into space, but it was better than before, and on top of that, they were fast, especially Darren Mattocks up front.

The experts will say, especially in the match against the United States, that Jamaica were outplayed because they had less of the ball while giving up too many attempts on their own goal. Jamaica, however, did what they had to do, and they did it well.

Jamaica were good, quite good. It was their second appearance in the final, but this one was more satisfying and more fulfilling, and on top of that, with a little luck, without the injury to captain and goalkeeper, Andre Blake, they had a good chance of walking away as the Gold Cup champions.

It was a lovely and revealing tournament. Jamaica, under coach Whitmore, showed its true colours, and hopefully, it is the beginning of good things to come. Young Jamaicans must have been inspired to see their very own in action on the big stage.

Hats off to Blake for his superhuman efforts in goal, for his three man-of-the-match awards, and for his quiet leadership, also to the entire squad, especially to Alvas Powell, Jermaine Taylor, and Kemar Lawrence, Owayne Gordon and Damian Lowe, Darren Mattocks, and Ladale Richie.

They were an inspiration for Jamaicans. They gave everything for Jamaica and for themselves. They played with pride and passion just as players like Noel Tappin, Anthony Hill, Denzil Lue, and Sydney Bartlett, Henry Largie, Lascelles Dunkley, Art and Asher Welsh, Neville Oxford, Frank Brown, and Delroy 'Mutty' Scott did years ago.

Apart from these, the players who should represent Jamaica must be committed to playing for Jamaica, and they must show that they are really Jamaicans and really want to play for Jamaica.

Commitment has been lacking in 'Jamaican' teams of recent times.