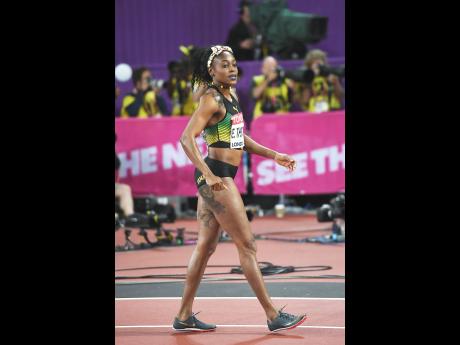 Donald Quarrie, technical leader for Jamaica's team at the 2017 World Championships shed some light on Elaine Thompson's absence from Jamaica's team in the 4x100m final and believes that Jamaica's track and field programme will bounce back from a disappointing showing at the just-concluded championship.

Jamaica ended the championships with four medals - one gold and three bronze - the lowest return for the country at the World Championships since the 1983 instalment in Helsinki, when three medals were won.

Thompson, who finished fifth in the 100m final after a reported illness, did not participate, as expected, in the bronze medal-winning 4x100m relay team, with Quarrie explaining that the sprinter was withdrawn due to fitness concerns.

"When I spoke to Stephen Francis, he explained to me that in practice, since she ran the 100m, she has not been able to push herself 100 per cent, and since he had not seen that, he did not want to take a chance with her going out there and pushing herself because he was not sure she would be able to do what he would want her to," Quarrie told the RJRGleaner Communications Group.

"As it turned out, we had a fantastic race, and I would say the last hand-off was not as smooth as the others, and it would have given us a chance to (get a better medal), but I think he was thinking of her, of her future, thinking of her as an individual because in his eyes, she was not quite ready, and although I'm sure he would have wanted her to represent Jamaica, he would not have wanted her to exert herself and fail," Quarrie added.

The 1976 Olympic 200m champion is, however, remaining positive and pointed to the performance of the field events athletes in particular

"We had a lot of finalists in the field events, and I believe our field events programme is on the rise, and in the near future, if we can start getting more support - because if for any reason we fail in one area, we want to balance it, so having an all-round team should be our goal, and at the same time, we may not achieved what we wanted when we got here, but we have seen where other countries and athletes had mishaps also," said Quarrie.

"Things have not come through the way they planned, and that's part of track and field. Let's go back to the drawing board, maintain our name and standard in the sprints, and build up the other areas," said Quarrie. "We have taken a pause, but we will be a force to reckon with very soon again."