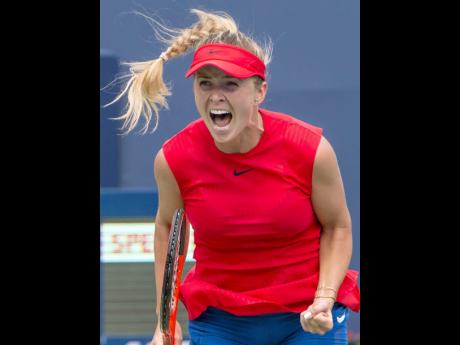 It was Svitolina's fifth WTA Tour title of the season.

The 22-year-old Ukrainian used powerful groundstrokes and a big serve to keep the sixth-ranked Wozniacki off balance.

A break at love at 4-4 gave the fifth-ranked Svitolina the edge in the first set. She wasn't threatened again in the 77-minute match.

Svitolina had a clear edge from the baseline, thanks to her impressive retrieving ability. Wozniacki was forced to go for more winners and started making more unforced errors as a result.

Wozniacki, a 27-year-old former world number one from Denmark, varied her shots throughout the match, combining power with more looping topspin returns.

Svitolina wasn't fazed, as her consistency and power game proved to be too much.

It was Svitolina's fourth victory over a top-10 opponent this week and third win in two days.

It was Svitolina's third Premier 5 title of the year.

Svitolina has reached five finals this year and won them all. Wozniacki fell to 0-6 in final appearances this season and is 0-3 in head-to-head matches against Svitolina.

Svitolina will move one spot to a career-high number four when the new rankings are released today.