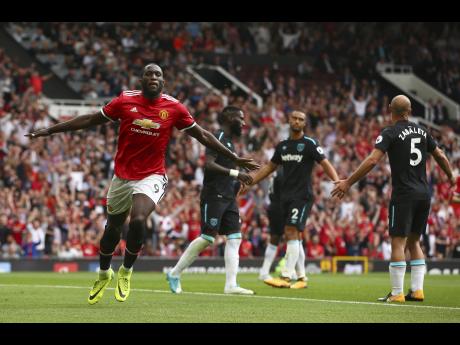 With off-season recruit Nemanja Matic also excelling in central midfield, United looks to have a side that can seriously challenge for its first league title since 2013, Alex Ferguson's final year at the club.

Lukaku finished off a quick counterattack sparked by Matic's closing-down of an opponent in the center circle to put United ahead in the 33rd minute. The striker added a second with a header from Henrikh Mkhitaryan's free kick in the 52nd.

Substitute Anthony Martial ran on to Mkhitaryan's through-ball to slot home a third goal in the 87th and Pogba was given space to curl in from 25 metres, completing United's biggest league win under JosÈ Mourinho.

"We have reasons to be optimistic," Mourinho said, before adding: "My feet are on the ground and I am calm."

Yet, this was a display to strike fear into United's title rivals especially champion Chelsea, who were beaten to the signing of Lukaku and then made what appears an ill-judged decision to sell Matic to United.

Lukaku will take many of the plaudits, but Matic played as significant a role in his position as midfield anchorman, breaking up attacks, winning headers in front of the back four and giving fellow midfielder Pogba freedom to attack.

United's defence was given an easy ride with Matic stationed in front of them, and Pogba could also thrive this season.

Lukaku was the signature signing at £75 million and he made it three goals in two competitive games, after his consolation against Real Madrid in the Super Cup last week.

"He is playing well, working hard," Mourinho said of Lukaku. "For any striker, they can play phenomenally well but if no goals, the pressure can be on them ... . He knows from me, no pressure at all."

Lukaku has now scored nine goals in nine Premier League games against West Ham, and 11 goals in 11 games in all competitions.

West Ham fielded its four summer signings goalkeeper Joe Hart, right back Pablo Zabaleta, winger Marko Arnautovic and former United striker Javier Hernandez but was overwhelmed. It was the first of three away games to start the season due to its London Stadium hosting the IAAF World Championships.

"They were much better than us in every department," West Ham manager Slaven Bilic said. "Better without the ball and with the ball. They have that individual quality."