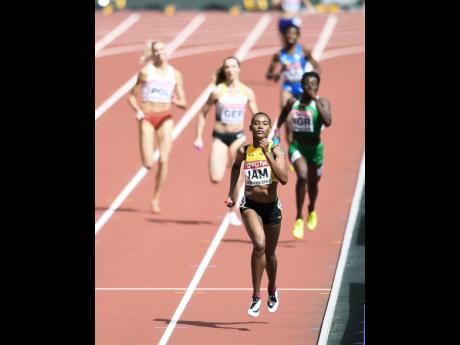 The 16th edition of the track and field showpiece, the IAAF World Championships in Athletics, is now at an end. Contrary to predictions in the public space and media circles, Jamaica did not enjoy the satisfying results which has been the case in recent times. There were disappointments, as there always will be. No one likes to have their hopes dashed, even if they were built on sinking sand. However, the way forward cannot be a smooth one unless certain truths are unearthed and addressed in a manner to bring about the change required to set them right. In that regard, Foster's Fairplay is drawn to a situation emanating from some disturbing announcements unveiled towards the end.

It was reported by a media house that all was not well in the ranks of one of the track clubs whose athletes have performed with distinction throughout previous events. The news, carried on television, was that there was an altercation between two athletes, Stephenie-Ann McPherson and Shericka Jackson, who were selected to run the finals of the women's 4x400m relay, the only event left from which Jamaica could add to its paltry medal count. Heated words were exchanged and the technical director, Donald Quarrie, as he confirmed on the same forum, tried to intervene - to use his own word, to 'part' the two women in order to prevent further escalation of what was threatening to be an even nastier affair.

Given the seriousness attached to the incident by Quarrie, one is hopeful and, in fact convinced that this will not end here. Already, buttressed by the media publicity given, it has placed a smear on the country's image, especially when one hears the type of conversations and accusations that were alleged to have gone along with the spat. Foster's Fairplay has covered championships at this level dating back to the late '80's. As the sayings go, 'things happen,' but this one looks totally out of line with what is expected from the nation's athletes. Also, when one of the athletes, according to Quarrie, said she would not be taking part in the relay with her teammate, the coach assigned to the mile relay, also a member of the club's top brass, offered the excuse that she was suffering from a condition which would render her unable to run from a health perspective. This was allegedly supported by a medical person. Under the circumstances, Foster's Fairplay is at pains to accept this excuse, despite the input of the professional.

Foster's Fairplay has, in the past, chided the Jamaica Athletics Administrative Association (JAAA) for tardiness and in some cases, neglect in probing and, 'letting the chips fall where they may'' in incidents of this nature. Athletes on national duties should carry a responsibility to the public who contribute to the cost of getting them there. It is not acceptable that they make decisions which run counter to the well-established and learned thoughts of those who are present to offer them advice as to how they should represent their country. They are not required to be robots and place themselves in a situation of not giving their own opinions, but this does not seem to be what was being played out on the final day of competition in London.

Donald Quarrie is a respected icon of Jamaica's sport and this faux pas, by his own account, left him embarrassed. He seemed hurt during the interview on national television while he was relating the story. He has promised that this one will receive the necessary follow-up. He has asked that the JAAA administration get more involved with how coaches who are sent on national duties interact with team administration.

May all this happen and real quick. There are athletes at these championships who need to be disciplined.