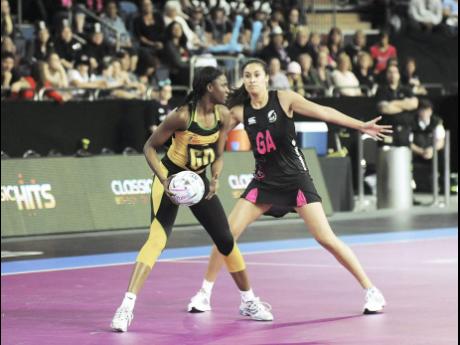 Collin Reid
Jamaica’s Malysha Kelly (left) looks to pass the ball as she is defended by New Zealand’s Maria Tutaia during a World Fast5 Netball Series semi-final match in Auckland, New Zealand, in 2012.

The 6'1" Kelly, who represented the Adelaide Thunderbirds in the Australian Suncorp Super League last season, said that she is looking forward to suiting up for the Southern Steel next season.

"I am feeling very excited because I always seem to get along with the New Zealanders," Kelly said. "I have been hearing about the Southern Steel team and how supportive they are in the community, and they are very netball-orientated," she said.

Kelly's compatriot Jhaniele Fowler-Reid represented Southern Steel last season before she decided to move to the Australian league for the coming season.

The 27-year-old Kelly said that the New Zealand league would help to improve her because it is very competitive.

"I have been watching this league over the years, and it is very interesting and intriguing in how they play defence," said Kelly, who last represented the Sunshine Girls during their three-match tour of New Zealand last September.

"I always wanted to learn the New Zealanders' style of defending, so I am looking forward to going in and learn as much as I can," she said.

"I think that this league will definitely improve my game because the more games you play, the better you become," Kelly said.

She also noted that the league is highly competitive and she would have to be at her best at all times in order to keep up with the rigours of the competition.