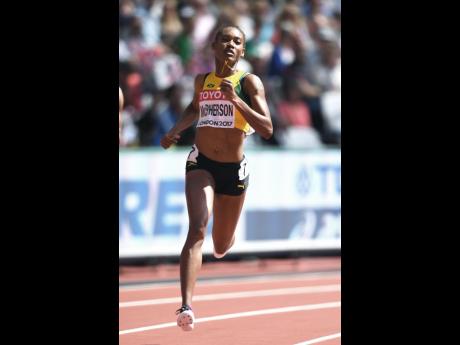 Quarter-miler Stephenie-Ann McPherson is underlining that she did have a slight injury concern ahead of the women's 4x400m relay final, but is insisting that she felt ready to compete in the event at the IAAF World Championships in London.

The Commonwealth champion was involved in a team meeting argument and was later withdrawn from the line-up due to injury and was eventually replaced by Anneisha McLaughlin-Whilby, who pulled up injured on the second leg.

Afterwards, technical leader Donald Quarrie questioned McPherson's injury, noting that she was fine during the team meeting, only for him to be told shortly afterwards by team coach Paul Francis, who also coaches at the MVP Track Club (where McPherson is based), upon arrival at the stadium, that she was injured and could no longer participate.

McPherson admitted that a discussion over which kit was to be worn led to a verbal exchange between herself and her teammate and MVP training partner Shericka Jackson, adding that in anger, she suggested the team could race without her.

The argument started because the other members of the team wanted to wear a version of the kit that McPherson says was only available in sizes that were too large for her.

McPherson also sought to clarify that there was never any physical altercations between herself and Jackson, noting, "I don't know anything about any fight. We exchanged words, there was no fight."

"All I am saying is that I was ready to run," McPherson underlined.

McPherson told The Gleaner that she had a quad injury during the first round of the event the previous day and had received massage therapy afterwards.

She added that after team doctor Kevin Jones tested her and confirmed that she had a problem, she was told by Paul Francis that she should not warm up because he had already made the change to the team, noting that she believes it was because of her earlier quad issue in the heat.

"Paul (Francis) told me two or more hours before that I don't have to warm-up because he already made the change. I don't know the reason, but I figure maybe because I was cramping up," said McPherson. "There was a misunderstanding between Paul and DQ (Quarrie)."

McPherson told The Gleaner that she was suffering from cramps in her leg during the first round of the event on the previous day and had received massage therapy afterwards.

Interestingly, speaking to the RJRGleaner Communications Group, Paul Francis said that McPherson had a long-standing issue with her quad and that she was pulled from the event after an evaluation from team doctor Kevin Jones.

"McPherson has had a quad injury for about two months, notice after the semi-finals at trials she did not run the final. If McPherson has expressed that she is feeling uncomfortable the first thing I should do and I did, is to call the technical director and say 'Sir did you submit the team?', he said yes, and I told him we may need to make a change. I quickly got Dr (Kevin) Jones, got him to evaluate her, he indicated that she might have a Grade One strain in her quad," Paul Francis told the RJRGleaner Communications Group.

The Jamaican team was finishing outside of the medals in the women's 4x400m for only the third time since the 1997 championship in Paris.