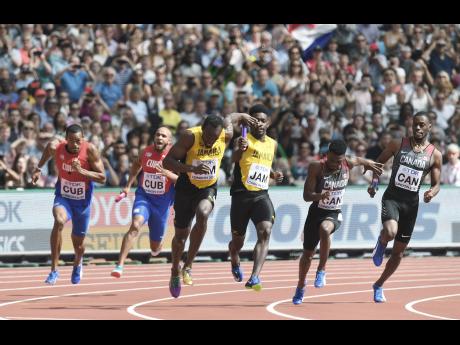 Ricardo Makyn
Usain Bolt on anchor receives the baton from Michael Campbell during the sprint relay heats at the IAAF World Championships in London, England, on Saturday.

The World Athletics Championships in London is now over. Amazingly, I heard a Jamaican anchor on local television describe the Games as "one of the best ever!" I am of the opinion that these Games were one of the worst ever! I was not there, but took a keen interest in the happenings during the Games.

The media pundits and experts before the Games had varied predictions of medals to be earned by Jamaica during the Games. My own prediction was 12 medals.

The average prediction of these media experts was 10 medals. Jamaica ended with four medals, one gold and three bronze. As the days of the competition went by, and Jamaica kept doing worse than expected, the new cry was: "transition, we are a team in transition". "Watch us in 2020!" Some of the medals "lost" (not won) can quite rightly be said to be due to injury. However, it is my opinion that the team that accompanied the athletes need to give the nation a fulsome response to the many burning questions that every Jamaican is anxious to ask.

First: the food and drink arrangements at the Games were allegedly woesome and inadequate. I am told that there was no sports drink available for athletes at the many venues and hotels where the athletes were accommodated. This could be one of the factors that resulted in our sprint queen having to spend many hours in the drug testing room, trying to give a specimen of urine that met the strict criteria of specific gravity. This failure to produce a specimen with an acceptable level can be directly attributed to rehydration with water only.

Further, athletes who arrive at their domicile after hours, could not access food at the hotel and so arrangements had to be made to obtain food from outside sources. The food provided was also a problem regarding taste, thus many athletes and support staff sourced food outside. This apparently led to an outbreak of a norovirus attack on some athletes who had symptoms of vomiting and diarrhoea, resulting in very poor performances.

I am also told that the official water provided had a brackish taste and was shunned by many of the performers. This forced the support staff of some teams to source other brands of water for their athletes. Jamaica was among this group.

The weather was decidedly 'British'. Some days cold, others damp and rainy, others 'nice'. What that meant to the everyday fan of the sport was that the athletes' support staff would ensure that our national treasures were advised regarding wearing sweatsuits and keeping warm during the wait before racing.

The circumstances surrounding injuries to our stars because of up to 40 minutes waiting before a race should be adequately explained by our returning administrators.

Maybe the organisers are solely to blame, but did the same thing happen to McLaughlin-Whilby on the last day of the competition? This unfortunate athlete was a last-minute substitute in the women's 4x400m relay team, because as team leader Donald Quarrie explained: he had to personally intervene in an altercation between two of our national treasures, one of whom told him that she would not be running on the relay team if her protagonist, who was previously selected, ran.

Her coach announced that she was "injured". The team physician, after an examination, told Quarrie that if the athlete wanted to run, she COULD (my emphasis) run. This indicates to me that the report to the team leader from the coach was possibly false.

The admission by Head Coach Wilson that not selecting of one (or both) of Jamaica's 400m men's finalists for the preliminary and qualifying heat of the 4x400m relay was an "error," needs amplification.

Athletes, like any other professional can have "bad days" when nothing seems to go right. We understand that and after disappointment and a period of grieving, we can say 'next time', and label this 2017 debacle as transition. However, we need to have a calm, professional look at the outcome of our stars in London last week. If there were instances of incompetence, indiscipline, or dereliction of duty by whoever, 'Oops' can never be accepted as an excuse, and culpable individuals must be sanctioned in order to minimise future occurrences.

The idea that Jamaica's 'sprint factory' is closed for repairs, can only be accepted if the repairs are done. The retirement of the world's greatest Track and Field athlete is a sad and morale-sapping reality. However, we cannot allow his legacy to be tainted by an attitude of "we dead now". Usain Bolt would be very distressed if we allow Athletics to follow the lead of West Indies cricket. We need to identify and implement activities that will allow us to show the world that post Usain, we are still number one.