Diamond Mile Day 2017 promises to be bigger and better 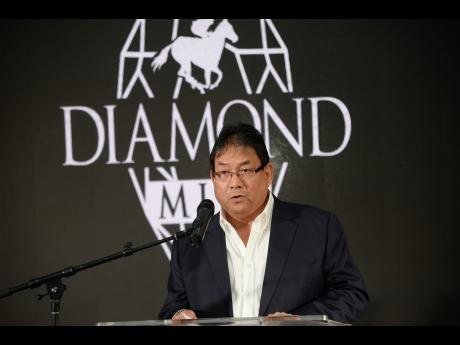 The prestigious Betting, Gaming and Lotteries Commission's (BGLC) Diamond Mile has grown rapidly to become one of the nation's and the region's most lucrative and glamorous horse racing events, and at yesterday's launch of the third staging at the Spanish Court Hotel, Paul Hoo, the Supreme Ventures chairman, promised that the 2017 edition, set for December 2, will be bigger and better.

"Through the vision of previous president Gary Peart, we came up with the prestigious Diamond Mile concept. We watched it grow since that first staging ... and continue to work hard to achieve its objective of lifting the stature of the sport in Jamaica," Hoo said while referring to the event as Jamaica's version of the USA's Breeders Stakes.

"Over the past two years it has become a much anticipated and highly rated event. Horse racing in Jamaica will be restored to its former glory as the sport of kings. A prestigious event that brings out patrons in their numbers, encourages sponsors to come on board and makes all stakeholders proud," he said.

The Diamond Mile race day, the richest and most attractive in the region, will pit the best native-bred horses up against imported thoroughbreds in the end-of-year event for a whopping U$115,000 purse for the Diamond Mile winner. Each race on the card will be have prize money of over J$1 million. But in addition to the quality and impressive line-ups on the expected 14-race card, the Diamond Mile will also showcase exquisite fashion, excellent food and great entertainment.

"An event like this goes a long way to lift the sport of horse racing in Jamaica," Hoo added.

Vitus Evans, the executive director of the BGLC, said the industry faced challenges in attracting new audiences, but noted that the Diamond Mile has had great success where attracting fans is concern.

"The Diamond Mile race day has successfully brought more people to Caymanas Park than any other day," he said. He added that they will be aiming for an even larger crowd this year to witness what will be an exciting day of racing.

Clovis Metcalfe, the BGLC chairman, said their role in sponsoring the event was very critical.

"The Diamond Mile will feature Jamaica's top thoroughbreds, including SHE'S A MANEATER, SOTOMAYOR and FEARLESS SAMURAI, among others. But they will all have to earn their place in the race," noted SVRL racing secretary, Denzil Miller.