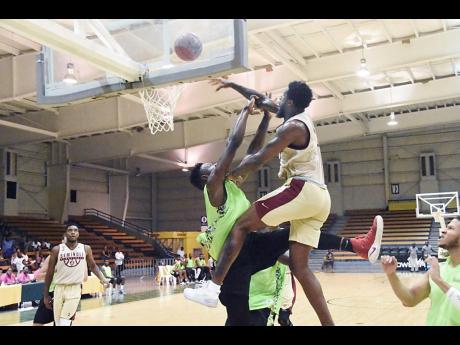 Contributed
Phil Cofer (right) of Florida State University goes up for a slam dunk over the head of Washington Aiken of Minto 79ers during their August 14, 2017 preseason game at the National Indoor Sports Centre. 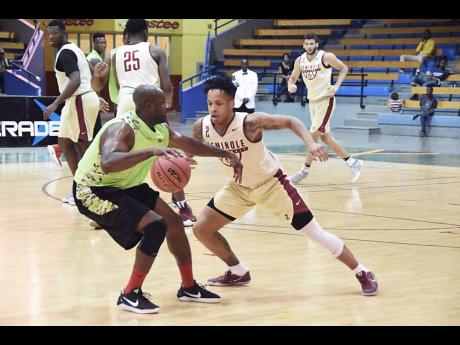 Contributed
Andre Smith (left) of the Minto 79ers assesses the play while being guarded by C.J. Walker of Florida State University during their Monday's preseason game at the National Indoor Sports Centre.
1
2

Florida State University (FSU) had a blow out 116-78 win over the Minto 79ers - a Jamaica Select team - in their preseason game at the National Indoor Sport Centre on Monday night.

After a close first quarter that had the tourists leading 22-19, the game became more open with the class of the eighth ranked NCAA men's basketball team in the United States overcoming the tiring Jamaicans.

By half-time, the Seminoles led 54-34 before going on to close out the game with the consummate ease.

Veteran Kimani Ffriend was the best performer from a Jamaica perspective with 16 points, with major support coming from Tyrone Lattibeaudiere (15 points) and Damion Staple, who bucketed 13 points.

FSU head coach Leonard Hamilton, commenting on the level of competition, said: "I just think we have a lot of depth and I think it's the time of year where a lot of the Jamaican players are not in the best condition. We've been practising for a while so the quality of our depth kind of wore them down. But if you notice in the first quarter it was (up and down), but I think as the game went on, and because I played so many different people, it wore them down. But those guys gave us a good fight."

Minto 79ers head coach Michael Minto said: "Most of our guys are really not here because it's getting to the end of August so most of them went back to Europe. This (team) that we used here is just to give them a little compe-tition. Florida State are a very good team; they're ranked number eight in the nation. They are in good shape, we haven't practised; so we just come out here and do the best we can."

The FSU, who are on a 12-day preseason training trip, will play their final game against another Jamaica Select team tonight at the same venue. Match time is 8 o'clock. Admission is free.