Neglect of junior programme led to poor showing in London 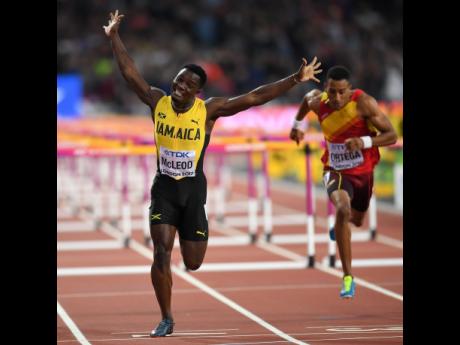 The 16th IAAF World Championships is now history. It is one which fans of local track and field will want to forget as quickly as possible as Jamaica walked away with just four medals - one gold and three bronze - to finish 16th overall.

This is unfamiliar territory for Jamaica. For the past six championships, the country has done quite well, finishing with eight or more medals and a place in the top 10, the best performance coming at the Berlin Championships in 2009 where celebrated with 13 medals - seven gold, four silver and two bronze. They placed second overall on the medal table, behind the United States, who ended with 22 medals including 10 gold.

Jamaica's team left for London with high hopes several weeks ago as with it being the final championships for the great Usain Bolt, many experts were predicting between 10 and 12 medals.

The athletes gave their best, but over the 10 days of competition, there were several mishaps, including injuries, resulting in many fans asking what really had gone wrong.

The reason is simple. A neglect of our junior programme over recent years has contributed significantly to Jamaica's poor performance. While the likes of Bolt, Yohan Blake, Asafa Powell. Veronica Campbell-Brown, Kerron Stewart, Melaine Walker, Sherone Simpson, Shelly-Ann Fraser-Pryce and others were bringing in the medals, the junior programme was put on the back burner despite announcements by the present administration that this programme would have been given a lot of attention. This has not been the case, and with majority of our senior athletes leaving the sport simultaneously, the transition will be a long process.

The reason for the great rise at the senior level by Bolt and company was the vibrant junior programme which was established under former president Pat Anderson, where the likes of Alfred Francis, Brian Smith, the late Charlie Fuller and Juliet Parkes played great roles. At the conclusion of Boys and Girls' Championships in those years, the top athletes from the respective schools, along with their coaches, were invited to weekend camps at G.C. Foster College. The athletes went in on a Friday afternoon and departed on Sunday.

These camps have been shelved, and this is definitely one of the reasons for our recent dismal performance. After the high-school championships, it is the coaches who have to take on the challenge of preparing the athletes for the national programme, and this is a problem as many of the coaches are not paid. Some have to dig into their pockets, and this should not be the case.

A look at the recent National Junior Championships was a perfect example. Many of the athletes who were outstanding at Champs did not turn up at the Trials.

While we were dominating, other countries, including the United States, were planning hard while we took things for granted. It is not too late. We need to go back to the drawing board and invest in our juniors, or we could find ourselves consistently picking up one or two medals at global meets.