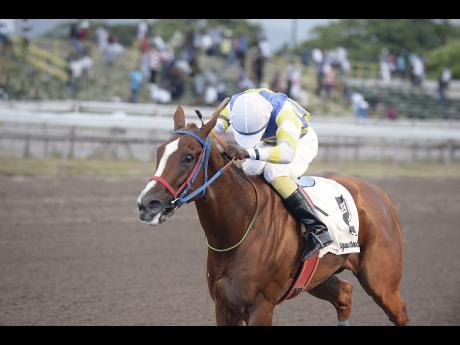 LUNAR ROCKET should this afternoon make amends for her narrow loss to FRANCIA'S PRIDE on Saturday when she ambitiously went out of her distance, seven furlongs, and was beaten by a neck at the wire.

The speedy filly returns quickly, going a furlong-and-a-half shorter and should use her pace to turn back rivals at five-and-a-half furlongs.

Since returning from a five-month lay-up out of a new barn, LUNAR ROCKET has impressed in two starts. She ran a great race on last but was beaten by the distance after being pestered on the lead by DR BANNER.

Her splits were consistent with her July 22 comeback victory, an uncontested nine-and-a-quarter-length win in which she hardly broke a sweat in clocking 1:12.1 for six furlongs, prompting trainer Joseph Thomas to take a shot at seven furlongs up in class.

Jockey Oneil Mullings throttled the filly's speed down the backstretch - running the first two quarters two-fifths slower than her previous race. However, she was forced by DR BANNER to match the 1:12.1 six-furlong split and fell victim to the closer, FRANCIA'S PRIDE.

DR BANNER returns for a speed duel with the filly but does so at 123lb, picking up eight pounds, whereas LUNAR ROCKET has risen by four pounds after beating the gelding by three-and-a-half lengths at seven furlongs on Saturday.

The other speed horses of note in the line-up are GOLD MINER and DRAGLINE, drawn at post one and two, carrying 54.0 and 56.0 kilos, respectively. SIMPLY THE BEST is out wide at eight with 54.0 but has disappointed her handlers in back-to-back races.

Interestingly, champion jockey Omar Walker, Wayne DaCosta's stable rider, has abandoned GOLD MINER aboard whom he had defeated DRAGLINE, now his chosen mount. Walker's decision to partner DRAGLINE instead of GOLD MINER, especially after her loss to SIEMPRE BUENO, tells where his confidence lies.

LUNAR ROCKET is fresh, fast, light enough and gets the perfect trip to make amends under Shane Ellis. Though it might appear she has returned to the races too soon after seven furlongs on Saturday, especially being a filly, it should be noted that she was rested for more than five months.