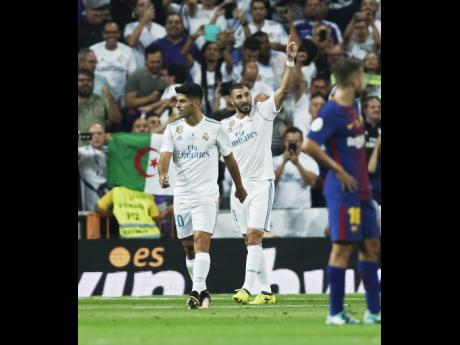 Real Madrid beat Barcelona 2-0 to complete a 5-1 victory on aggregate in the Spanish Super Cup yesterday dominating their fiercest rivals without the need of Cristiano Ronaldo or Gareth Bale.

Marco Asensio and Karim Benzema provided the goals in the second leg for a Madrid side that showed every ounce of confidence that Barcelona sorely lacked.

While Bale was rested on the bench, Ronaldo watched the game from the Santiago Bernabeu stands as he completed the first game of a five-match ban for pushing the referee who sent him off in Sunday's 3-1 first-leg win.

Asensio filled in perfectly for Madrid's star, scoring five minutes into the match for his second goal in the season's curtain raiser. Benzema added a second goal in the 39th after Lucas Vazquez had already hit the post for the hosts.

Barcelona struggled to score for a second match since the shocking departure of Neymar on a world-record transfer to Paris Saint-Germain. The closest they went to scoring was Lionel Messi and Luis Suarez hitting the woodwork in the second half after the title was already in Madrid's grasp.

"Our first 20 minutes were magnificent," Madrid defender Dani Carvajal said. "We ran right over them and they felt overwhelmed."