McCarthy leads the way for Tallawahs 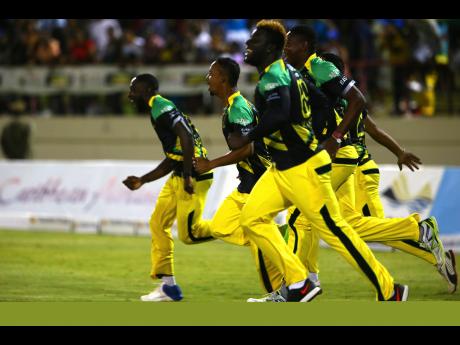 Getty Images
Members of the Jamaica Tallawahs team run on to the field in celebration after beating the St Lucia Stars during Match 14 of the 2017 Hero Caribbean Premier League at the Darren Sammy Stadium in Gros Islet, Saint Lucia, on Tuesday night.

Reigning champions Jamaica Tallawahs romped to their third straight win of their Caribbean Premier League campaign when they came from behind to beat the luckless St Lucia Stars in an entertaining contest here Tuesday night.

Chasing a competitive 174 at the Darren Sammy Cricket Ground, Tallawahs were languishing at 93 for four in the 14th over before Andre McCarthy produced a superb unbeaten 61 (3x4, 4x6) to take his side over the line with two balls left in the innings.

New Zealander Glenn Phillips chipped in with 32 in the opening slot while Jonathan Foo struck a valuable 22 down the order.

Stars, who have now lost six matches on the trot to continue winless, had earlier looked to be in control when opener Andre Fletcher blasted 84 not out and Marlon Samuels, 54, to get up to 173 for seven off their 20 overs.

They stumbled at the start, losing Johnson Charles for 12 with the score on 28 in the fifth over, playing on to fast bowler Mohammad Sami, while Australian Shane Watson nicked a catch behind off the same bowler three balls later, to fall for one with two runs added.

However, Fletcher and Samuels then combined in a 103-run third wicket stand to stun Tallawahs and put Stars in a strong position.

Phillips then gave Tallawahs a flying start, punching four fours and two sixes in a 21-ball cameo, as he put on 43 for the first wicket with Lendl Simmons (17).