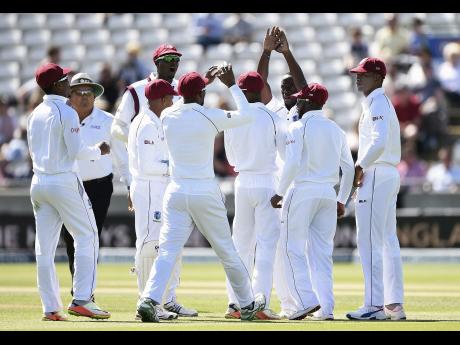 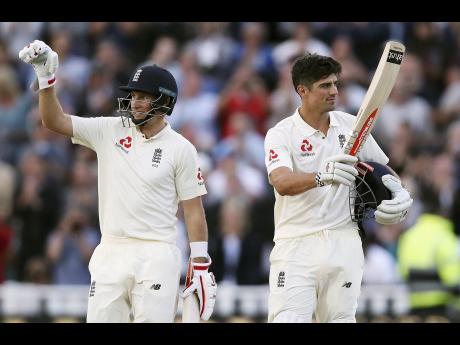 AP
England's Alastair Cook (right) acknowledges the crowd as he celebrates his century with captain Joe Root during day one of the first day-night Test match at Edgbaston, England yesterday.
1
2

A day that started brightly ended in typical uncertainty for the West Indies, after Alastair Cook and Joe Root plundered hundreds to give England an early hold on the historic first Test on Thursday.

After wickets for Kemar Roach and Miguel Cummins in the first hour put a smile on the Windies' faces, the unflappable Cook batted through the opening day of the first-ever day/night Test in this country and was undefeated on 153, and Root, the player that succeeded him in the post of England captain, made 136, as the home team reached 348 for three in their first innings at the close.

For the better part of the day, there was little for the West Indies to celebrate, after Roach and Cummins removed debutant left-handed opener Mark Stoneman and rookie Tom Westley, respectively, both for eight, to leave England 39 for two.

A lack of consistency from the Windies' bowlers saw Cook and Root purposefully wrest the balance power England's way with a record 248-run, third-wicket stand.

Small periods of attrition from the Caribbean side were often broken by crisp strokes for boundaries from Cook and Root, as they majestically advanced their own and their side's cause before a near capacity crowd.

Holder came close to breaking the stand in the period between lunch and tea, when Root top-edged a cut through the slips to third man for his 10th boundary to reach his 50 from 83 balls before he later swept a wayward delivery from part-time off-spinner Roston Chase hard down the leg-side for his 19th four to bring up his 13th Test hundred from 139 balls.

Chase was again in the thick of things, when Cook chopped a delivery to backward point for a single to reach his 31st Test hundred from 187 balls in the third over after tea.

Roach, playing his first Test in 19 months after battling back from a succession of injuries and patchy form, used his vast experience and was easily the pick of the bowlers.

He was rewarded for his persistence throughout the day, when he bowled Root in the final hour of regulation time, after the England captain essayed a tired-looking drive at a delivery that moved back after pitching to finish with 2-2 from 20 overs.

Things might have looked better for West Indies had slip fielder Jermaine Blackwood held on to a very sharp chance, after Dawid Malan, on two, top-edged a cut at a delivery from the part-time off-spin of Kraigg Brathwaite.

Holder's strange decision to delay taking the second new ball when it became due after 80 further epitomised the lack of purpose from the Windies in the closing stages, as Malan batted through the remainder of the day to usher Cook to his 150, which came when he drove Joseph through mid-on for his 23rd boundary.