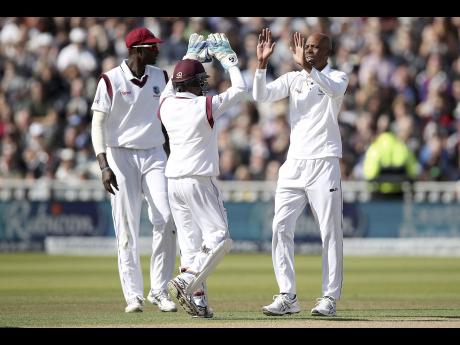 When rain halted play a mere seven overs after tea on the second day of the historic contest, the Windies were on 44 for one in their first innings, with debutant right-hander Kyle Hope unbeaten on 25 and opener Kieran Powell on 18.

They have so far added 44 for the second wicket, following opener Kraigg Brathwaite's demise at the hands of seamer Jimmy Anderson without scoring.

Earlier, England had piled up 514 for eight declared behind an excellent 243 from veteran left-hander Cook.

He began the day on 153 and, all told, faced 407 balls and struck 33 boundaries before becoming the last of four wickets to tumble in the post-lunch session, triggering England's declaration.

Dawid Malan chipped in with 65 - his maiden Test half-century - but the Windies hit back in the second session, snatching four wickets for just 48 runs to limit the damage.

Part-time off-spinner Roston Chase was behind the mini-collapse, finishing with four for 113, while seamer Kemar Roach failed to add to his overnight tally and ended with the two for 86.

Resuming the day on 348 for three in their first innings, England flourished as Cook and Malan extended their fourth-wicket stand to 162 before being separated.

They survived a testing period from Roach in the opening session before opening up, with Cook gathering back-to-back boundaries off pacer Alzarri Joseph's first over - the 11th of the day - to move into the 170s.

He was perched on 182 at the first drinks break and reached his double hundred about 25 minutes before lunch with a fortuitous boundary, guiding Roach to third man, where Kyle Hope made a hash of a simple fielding effort on the ropes.

After the break, West Indies enjoyed the better of the exchanges as England called time on their innings when Cook played down the wrong line to Chase and was lbw on review.

Left with an hour to survive before tea, the Caribbean side lost Brathwaite in the third over, nicking a defensive prod at an Anderson outswinger to the wicketkeeper, without a run on the board.

But Kyle Hope and Powell overcame a testing time from the new-ball pair of Anderson and Stuart Broad to reach tea at 13 for one before steadily growing in confidence afterwards before the anticipated bad weather finally arrived about 25 minutes after tea, forcing players from the field and ending the action prematurely.