No long-term deal yet for Whitmore 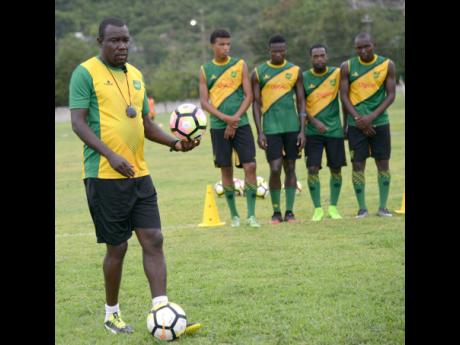 Ian Allen
Coach Theodore Whitmore (left) preparing his players for a drill during a Reggae Boyz training session at the University of the West Indies/JFF/Captain Horace Burrell Centre of Excellence yesterday.

National senior men's interim coach Theodore 'Tappa' Whitmore confirmed that he is yet to get a permanent deal, but will continue to be in charge for two upcoming friendly international games.

Whitmore's initial arrangement ended last month, after he carried Jamaica to the final of the CONCACAF Gold Cup, where they were beaten 2-1 by the United States.

Interim Jamaica Football Federation (JFF) President Bruce Gaynor told The Gleaner earlier this week that the federation intends to finalise the details of a contract with Whitmore.

He also confirmed that Whitmore agreed to coach the Reggae Boyz ahead of their August 24 friendly international against Caribbean rivals Trinidad and Tobago. Whitmore was given an interim deal by the late JFF President Captain Horace Burrell in September 2016.

The Reggae Boyz will oppose Trinidad and Tobago's Soca Warriors on August 24 at the Hasley Crawford Stadium in Trinidad before taking on Canada on September 2 at the BMO Stadium in Toronto, Canada.

However, Whitmore said a deal is yet to be done.

"I'm not in any contract talking with the federation (JFF), but you know we have two friendly games against Trinidad and Tobago and Canada and I'm in charge, so I don't know what will happen after these games," Whitmore told The Gleaner yesterday during the Reggae Boyz training session at the University of the West Indies/JFF/Captain Horace Burrell Centre of Excellence.

"It is the same interim arrangement as in the Gold Cup, so again, I'm willing and ready to serve my country regardless of what. I only hope something can be put in writing soon. I am just interim at the moment, and for me, nothing has been done where a deal is concerned," he explained

With regards to the squad selected for the game against Trinidad and Tobago, Whitmore said they will continue to expose players..

"Against quality opponents like a Trinidad and Tobago, who are preparing for two World Cup Qualifying games, it gives us a chance to look at other players. We need more games like these for our local players. This is our base," he added.

The game against Canada will be on a FIFA date, so the group will be a balance of local and overseas based professionals.

"For the Canada game it will be a balance of overseas and local players. We want to give them proper international games. We don't want to just be practising alone," Whitmore pointed out.