Sakima to mull over options 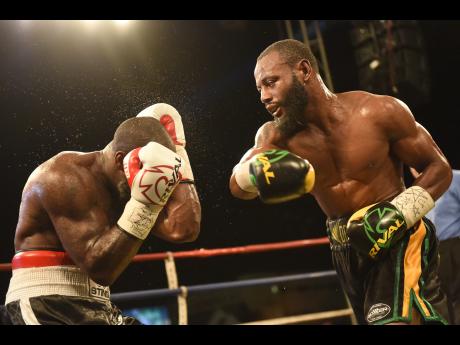 I Fight Promotions founder Chris Joy has said that he has two fights lined up for two-time Wray and Nephew Contender champion Sakima 'The Mauler' Mullings if he is interested in them.

Mullings and Corley have both shown interest in facing each other recently, but Corley said the bout could only happen if Mullings, who is 35 years old, comes down in weight from 154lbs to 140lb. Mullings, who said he would be honoured to face Corley because of his reputation, said he would meet his requirement.

However, Joy said that Harris, who is 39 years old, presents another option at 147lbs.

Mullings said he is also interested in facing Harris.

"Yeah, 100 per cent, definitely man!" he exclaimed. "It's the perfect situation for me because if they said they'll give me Vivian Harris at 147lb, and then Chop Chop at 140, then based on my circumstances, coming from a 154 tournament (the Contender Series which ended last month), it's a natural maturation of things for me to get back down to my proper weight division. By doing that, I'll take my time to get back down to 147, and from 147, I can work my way down to 140 instead of overworking and getting myself to 140 on the jump.

"In fact, they put everything back in my favour by allowing me to take the weight back off properly."

Mullings is the first two-time Contender champion, having won the tournament last month and previously in 2014, while Corley claimed the title in 2016.