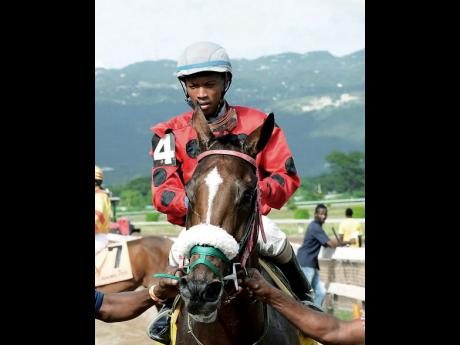 Thomas, who has been attracting the interest of trainers due to his allowance of seven pounds, started his run with 2-1 chance CHIEF PROSPECT in the fifth before landing the eighth and ninth with MY ANGEL BRIANNAH and WONG DON, respectively.

Facing foes, most of whom he had beaten in either of his last two races, including BALAZO, runner-up in both events, WONG DON easily tracked the pace from fourth down the backstretch before mounting his challenge along the rail entering the straight.

BALAZO was taken on by United States-bred DANBURY coming off the turn, but both were left standing when WONG DON attacked a furlong-and-a-half out, sprinting away to win by five lengths in a decent 1:19.2.

The stewards afterwards disqualified second-past-the-post BALAZO for hindering horses shortly after the start of the event. The chestnut colt was taken out of the frame and DANBURY promoted to second.

Champion jockey Omar Walker won the co-feature Portmore Cycle Centre Trophy in a driving finish aboard 6-5 favourite PROLIFIC PRINCESS, beating subsequently disqualified POLLY B by a length at five-and-half furlongs in a fast 1:05.4.

The five-year-old chestnut mare was not the best away from post-position two in the 10-horse field stacked with speed and was forced to bide her time, next-to-last down the backstretch, before turning for home wide in mid-track.

Roused by Walker in the stretch run, PROLIFIC PRINCESS, owned by the race's sponsor, Oneil Hinds, under the nom de plume Oshaun Connection, responded by weaving her way through the field before collaring long-time leader POLLY B close home.