Free-scoring Man U already look team to beat in EPL 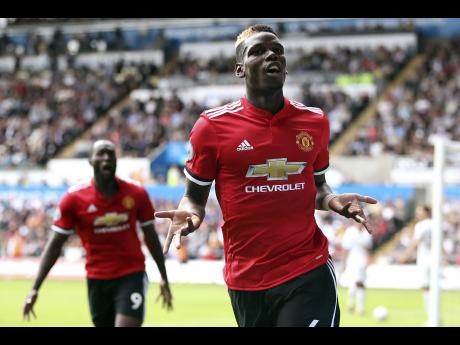 Free-scoring, tight at the back, and confidence oozing through the side, Manchester United already might be the team to beat in the English Premier League (EPL).

United have not challenged for the title since winning a record-extending 20th championship in 2013, Alex Ferguson's last year in charge. But back-to-back 4-0 wins have sent a powerful early-season message to their rivals.

Swansea was on the end of United's power and new-found clinical edge yesterday. Eric Bailly scored in the first half then Romelu Lukaku, Paul Pogba and Anthony Martial all netted in a devastating four-minute passage from the 80th.

"There was happiness in our play," United manager JosÈ Mourinho said. "There was no need to close the door. Just let the horses run freely, and they were magnificent."

Liverpool squeezed past Crystal Palace 1-0, Arsenal lost at Stoke 1-0, and there were comfortable first wins of the season for Leicester and Watford.

United's performance stood out, though, six days after their 4-0 win over West Ham at Old Trafford.

As United's attackers poured forward in the final 10 minutes, scoring at will and in stylish fashion too, memories flooded back to the entertaining teams that Ferguson moulded. United was profligate last season, the lowest scorer by far in the top seven with 54, but that seems to be a thing of the past in Mourinho's second year in charge.

It is the first time in 110 years that United have scored at least four goals in each of their opening two games of a season. Tougher tests await Mourinho's side, however.

MANE TO THE RESCUE

Mane capitalised on a defensive mix-up to prod home a 73rd-minute winner at Anfield and score for the second straight league game. Liverpool started the season with a 3-3 draw at Watford.

Coutinho was again missing - officially because of a back injury - a day after Barcelona had a third bid rejected by Liverpool for the Brazil playmaker. He has requested a transfer, but Liverpool says he is not for sale.

Jese joined Stoke on loan this week to relaunch his career after an underwhelming spell at Paris Saint-Germain, and the Spanish forward began life in England by scoring a winner against Arsenal on his debut.

The former Real Madrid player exchanged passes with Saido Berahino before slotting home a low finish in the 47th minute, sealing a 1-0 victory. JesÈ was given a standing ovation when he was substituted in the 71st.

Riyad Mahrez wants to leave Leicester, and his performance in the 2-0 win over Brighton must have impressed potential suitors of the Algeria winger

Mahrez had a hand in both goals, scored by Shinji Okazaki after 52 seconds and Harry Maguire in the 54th minute, and gave Brighton's defenders a tough time at King Power Stadium.

He put in a transfer request during the offseason, but Leicester have not received a suitable offer for English football's player of the year in 2016.