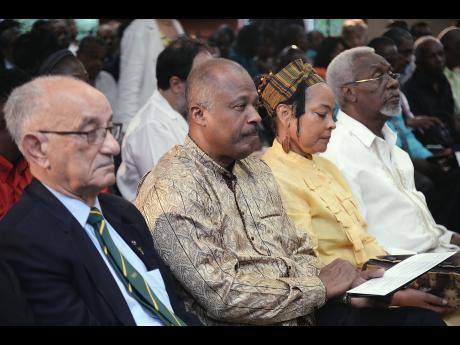 Jermaine Barnaby
From left: Mike Fennell former president of the Jamaica Olympic Association, Sir Hilary Beckles, University of the West Indies (UWI) vice-chancellor, Lady Beckles and former Prime Minister of Jamaica, P.J. Patterson, at the launch of the UWI's Faculty of Sport at the UWI's Regional Headquarters on Wednesday, July 26.

It was the day on which the Faculty of Sport was launched at the University of the West Indies for all its for campuses in the region, with academies of sport expected to follow in all four campuses, and it was a day on which past prime ministers; government ministers, past and present; bigwigs of the university; leaders of sport, and past and present sport stars gathered at UWI Mona to witness the event, which was transmitted live around the region.

It was also a day when those present warmed to the constant reminders from the many speakers of the abundance of sport talent produced by the region, the talent of giants like George Headley, Garry Sobers, Dwight Yorke, Hasley Crawford, Don Quarrie, Kirani James, Usain Bolt, Shelly-Ann Fraser-Pryce, and Elaine Thompson, and also the achievements of teams like the West Indies cricket team, the Jamaica and the Trinidad and Tobago football teams, the Jamaica netball team, and the Jamaican boxers among players and teams that have dazzled the world.

It was a day when sport took its rightful place in the Caribbean society with a Faculty of Sport at the 69-year-old university, thus bringing sport in line with other professions, according to former prime minister, P.J. Patterson, such as lawyers, doctors, engineers, and teachers, etcetera, etcetera.

As Professor Archibald McDonald, chairman of the Faculty of Sport task force, said, "Sport is at the heart of our regional identity and, through sport, we have made a global impact."

The Faculty of Sport was launched to satisfy the needs of the region, to ensure that the region continues to do things for itself; not to depend, for example, on American colleges, and to maintain its international greatness and global identity.

As of the start of the new academic year, the university will offer bachelor's and master's degrees in sports business, sports management, sports science, and the arts and science of coaching, and the main aim of the faculty is not only to enable the region to maintain its standard, but also to improve its position in the world of sport, and in every area of sport.

No longer, as Patterson said, will there be a hint of ridicule when one expresses a desire to become a career sportsman, or sportswoman, and as Professor Sir Hilary Beckles, vice-chancellor of the university and a promising youth cricketer, said, "No child should have to choose, and the Faculty of Sport is here today to send that message."

Times have changed, choices are everywhere, sport is big business, and the region, which has produced its share of the superstar athletes around the world, must continue to do so and to provide those who guide them were the sentiments of McDonald, Patterson, Beckles, the faculty's first dean, Dr Akshai Mansingh, and the host of speakers.

Once upon a time, all the coaches, the good coaches especially, and the support staff, came in from abroad. Today, they are coming from right at home, and the theme of the speeches at the launch was, "Let's find them, let's develop them, and let's get them out there to develop our own."

Today, it focused the spotlight on the likes of Lenworth Hyde, Wendell Downswell, Theodore Whitmore, Warren Barrett, on people like Maurice Wilson, David Riley, and on people like Stephen Francis and Glen Mills, the decorated coaches of superstars like Asafa Powell, Bolt, Fraser-Pryce, and Thompson.

Sir Hilary told the audience that he does not believe that "everything which goes up must come down", and he reminded the gathering of the Swiss and their reputation of producing the best watches around the world.

The theme was, "We can do it, we are going to do it, and we don't have to go abroad, or look abroad, to produce our own greatness."

On Wednesday, July 26, at the Mona campus, the mood was happy: the Caribbean had come of age and was ready for all comers with the hum of a production line.

Performances at the recent IAAF World Championship, and the West Indies cricket team, demonstrate the necessity and importance of the Faculty of Sport.