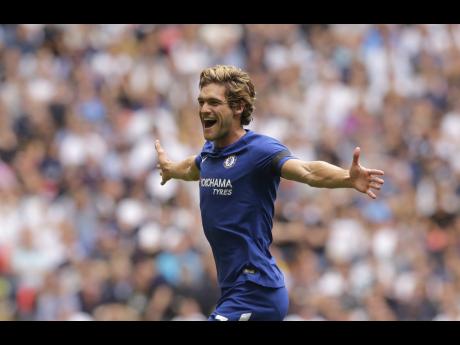 AP
Chelsea’s Marcos Alonso celebrates after scoring the opening goal of the game during their English Premier League football match against Tottenham Hotspur at Wembley Stadium in London yesterday.

For Tottenham, it was a gloomy start to its temporary residency at Wembley Stadium after going unbeaten throughout its final season at White Hart Lane before it was demolished to make way for a new venue.

Tottenham had been well placed to salvage a draw when Alonso's first-half free kick was cancelled out by Chelsea striker Michy Batshuayi inadvertently heading the ball into his own net in the 82nd minute just after coming off the bench.

But within six minutes, Chelsea was back in front and Batshuayi's blushes were spared in the London derby meeting of last season's top two.

Chelsea defender David Luiz intercepted the ball after Victor Wanyama received it from Lloris' throw. Alonso helped to knock the ball along to Pedro Rodriguez on the left flank and the wing back raced forward to receive a return pass in the penalty area. Alonso's shot from a tight angle then squirmed under the normally reliable Lloris in the Tottenham goal.

It was an instant recovery for Chelsea after opening with a home loss to Burnley that saw captain Gary Cahill sent off and suspended for the trip across London to Wembley.

"There was a lot of talking throughout the week," Alonso said. "I think we showed that we are together. We worked so hard this week and we 100 per cent deserved the win."

It was Tottenham's seventh loss in 10 matches at the national football stadium, which was also used for the north London club's European matches last season, and there was also a visit in the FA Cup semi-finals last season when it lost to Chelsea.

"It is not the reason we lost the game," Tottenham manager Mauricio Pochettino said of Wembley, where the pitch is wider than Tottenham's old White Hart Lane home.

The sides are level on a win apiece after Tottenham opened the season with a victory last Sunday over Newcastle, which lost 1-0 to Huddersfield in yesterday's other game.

"Frustrated? No," Tottenham manager Mauricio Pochettino said. "I am disappointed because I think we deserved more. Our performance was good."