Gayle to end two and a half year Windies ODI absence 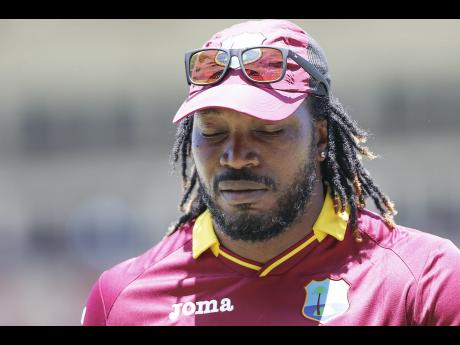 Talismanic opener Chris Gayle is poised to play his first One-Day International (ODI) in 29 months after being named in a 15-man squad yesterday for the five-match tour of England next month.

The 37-year-old will be joined by fellow Jamaican Marlon Samuels, who has also been kept out of the squad in recent times by Cricket West Indies' (CWI) controversial eligibility rule, which requires players to make themselves available for the domestic format in which they wish to play internationally.

However, CWI announced a "temporary player amnesty" last month, paving the way for the return of several of the region's previously marginalised stars.

The left-handed Gayle, with over 9,000 runs and 22 hundreds from 269 ODIs, will be a massive boost to a young squad, which has found life difficult on the international circuit and has slumped to ninth in the ICC rankings.

He last featured in ODIs during the 2015 World Cup in Australia and New Zealand.

Samuels, meanwhile, has not played ODIs since the Pakistan series last October, but his over 5,000 runs and 10 hundreds will also add to the experience of the unit.

"The panel welcomes back Chris Gayle and Marlon Samuels, who will both add value to our batting and help with the nurturing of the young batsmen in the team," chief selector Courtney Browne said.

The Bravo brothers, Dwayne and Darren, along with Sunil Narine, have opted out of selection for the tour, however.

Darren Bravo, exiled by CWI for nearly nine months over a controversial tweet, has indicated his unavailability for the tour. It is understood that the stylish left-hander is keen on first regaining his form in the upcoming first-class season for Trinidad and Tobago Red Force before returning to international cricket.

Likewise, Narine and Bravo have both timetabled their return for next year.

"Both Sunil Narine and Darren Bravo have declined to be considered for ODIs in England," Browne said.

"Narine has, however, confirmed his desire to play 50-over cricket again but has asked to play in our Regional Super50 before he is considered, and Darren said he was not available for selection.

"Dwayne Bravo said he is still not 100 per cent fit, but is looking at a possible return to international cricket next year."

Narine played as recently as the Pakistan series last October, while Dwayne Bravo has been controversially overlooked since his role in the abandoned one-day tour of England three years ago.

Meanwhile, uncapped Windward Islands batsman Sunil Ambris has been retained in the touring party. He was called up in the recent series against India but failed to play a match.

Test batsman Roston Chase, who made his debut against Afghanistan in June but who has mustered a mere 68 runs in six innings, has been dropped.

As expected, Jason Holder will lead the squad and will have Jason Mohammed as his deputy.

West Indies open the tour with a match against Ireland in Belfast on September 13 before facing England from September 19-29.