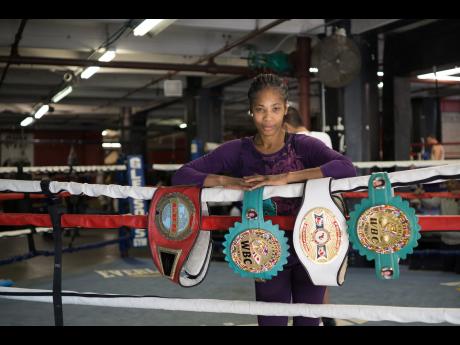 Contributed
Alicia ‘Slick’ Ashley posing in the ring with her championship belts.

Alicia 'Slick' Ashley, Jamaica' most successful and decorated female boxer, is in her own words "50 and fabulous" today.

Speaking to The Gleaner yesterday, on the eve of her birthday, Ashley, who was born in Kingston on August 23, 1967, and lived in the Rockfort area until she migrated to the United States with her parents when she was 11 years old, said that she is in great condition, is anxious to get into the ring to win another title, and hopes that she will get a call soon.

She was supposed to have a title fight this month, in an effort to regain her World Boxing Council Super Bantamweight title from Fatima Zarika, but the main bout on the card which was to be in Texas, was cancelled, and the card fell through.

"This has been the story of my life", she complained. "You train hard for fights, and at the last moment, something happens and they are cancelled. You know that this is part of the business, but when it happens so frequently, you find it to be unproductive and very frustrating. I had been training for two months for this fight, and to have it cancelled at the last moment is very frustrating," she stated.

Ashley has had a very successful career since turning professional in 1999, and has a record of 24 wins, 11 losses, and one draw. She has held several world titles and has the record of being the oldest female world boxing champion. She is listed in the Guinness Book of Records. She first held the record when she defeated Christina Ruiz on July 23, 2011 to become, at age 43, the World Boxing Council Female Super Bantamweight champion. She upped this later in 2015, when at 48, she defeated Christina McMahon for the same title.

Boxing, she said yesterday, has been a great part of her life.

"I wanted to be a dancer, but a career-ending injury prevented me from achieving that goal and my brother Devon, a former world kick-boxing champion, introduced me to that sport, and I eventually graduated to boxing. I have enjoyed the ride, but it could have been more satisfying if I was able to fight more frequently," she said.

She is disappointed that female boxing has not received the support and recognition that it really needs.

"We do not get the recognition that the men in boxing get, and that is so frustrating, because we also have the talent. My hope is that this will change soon. I have to admit that time is running out on me. I am fit, because I am always training, and mentally focused, but the fights are just not happening. Fighting once or twice a year is just not acceptable for me. If I did not have a job, I could not pay my bills. I train at my expense, but the fortunate thing is that I am a trainer, so I can keep myself involved in the sport."

She is based at the world-famous Gleason's Gym in New York, and apart from her own training schedule, she trains several young boxers.

"I will always be in the sport, and all I want is the opportunity to win another world title. That is my hope, and it cannot happen too soon. My other wish is that I get the opportunity to fight in Jamaica soon. When that happens, I will be the most satisfied boxer in the world. "

Asked what are her special plans for today she said: " I will be doing 50 minutes of boxing at my gym. I have lined up 10 sparring partners, men and women, and I will be boxing each one for five minutes each. I will box for 50 minutes, with a minute of rest in between rounds. That will make it a perfect birthday for me."

She did mention, however, that she "suspects" that her husband and relatives are planning a fabulous party for the weekend.

"I am looking forward to that, and I am going to enjoy myself. After all, I will only be 50 once in my life" she ended.