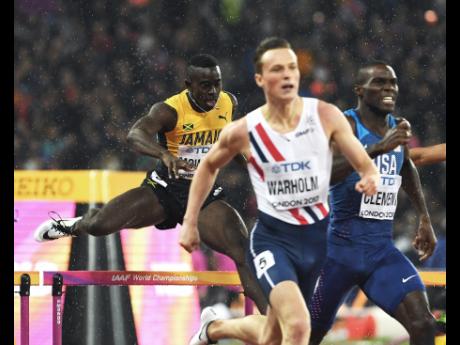 Ricardo Makyn
Jamaica’s Kemar Mowatt (left) finished fourth in the men’s 400m hurdles final in 48.99 seconds. Also in the photo are Norway’s Karsten Warholm (centre), who won in 48.35, and USA’s Kerron Clement, who was third in 48.52.

If you still don't understand why Jamaica won only four medals at the recent World Championships, one look back at the men's 400 metres hurdles will solve the mystery. Review that event and everything will be clear to you. Be warned, though. A chilly wind may accompany the realisation.

The 400m hurdles produced a stunning upset, exciting racing and the slowest winning time in World Championships history at 48.35 seconds. A year earlier, with some of the same athletes chasing gold, silver and bronze at the 2016 Olympics, that time wouldn't have got within touching distance of a medal. The big difference was the weather.

The Olympics were conducted under glorious Brazilian sunshine in Rio de Janeiro. The World Championships replaced that with a gloomy London chill measured sometimes at 13 degrees Celsius. It's no wonder our home-based sprint crew couldn't get going.

In that icebox, the incomparable Usain Bolt and the erstwhile Anniesha McLaughlin-Whilby pulled while speeding on medal bound relays, Yohan Blake cited a 'pulsing' hamstring. For all we know, the chill contributed to the troubles experienced by hurdler Ronald Levy, who injured himself as he warmed for the 110-metre hurdles heats, and Elaine Thompson, whose dicey Achilles tendon enforced her absence from the sprint relay. Nine will get you 10 that they would have fared better in warmer climes.

The weather was much better when Jamaica's track and field heroes won 12 medals, including four gold, in London at the 2012 Olympics. There was scarcely a drop of rain and the temperatures stayed in the mid-20s. From August 4-13, the rain made frequent visits and temperatures were often 10 degrees lower.

From here onward, preparation for big meets will have to include research on the worst weather for the time of year in the cities hosting the World Championships and the Olympics. If cold weather is on the menu, perhaps athletes should then choose meets that simulate the conditions they will face on the days that count the most. It would be the smart thing to do.

One wise head helped to distil two other antifreeze ideas. One was to have the athletes drink hot beverages to warm them from the inside. The other is the establishment of a training facility in the Blue Mountains, at Newcastle or in the Cockpit Country, where the elevation makes temperature bitingly low. Sport science would have to advise on the first idea, and for the other one to take shape, money would have to talk.

The World Championships 400m hurdles men's final has one more indicator of how cold it was in London. The winner was the athlete most at home in the sub-sprinter weather. While others shivered in their spikes, the gold medal went to Karsten Warholm of Norway. Brrr!