Williams gunning for a strong finish 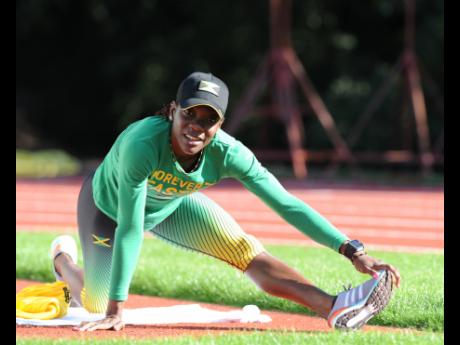 It took her a day to get over her London 2017 disappointment, and with a clean slate in front of her at today's Weltklasse Zurich Diamond League final at the Letzigrund Stadium, triple jumper Kimberly Williams is determined to close the lid on her season with a strong Swiss finish.

Commonwealth Games gold and World Indoor Championships bronze in 2014, Williams, for the first time since her debut at a major senior international championship in 2009, only had three jumps in the final - finishing outside the top eight in 10th place.

Nonetheless, Williams, who bounced back with a 14.44m second-place effort at her last outing at the Birmingham Diamond League meet on Sunday, has backed the new format of the series and is looking to stretch her form.

"I think it's nice that you have to accumulate your points over the four meets (involving the women's triple jump), it's only the top eight that's here so you have to work for it. It's not like you can just go to one meet and then don't come back, because then you won't have enough points, so I think it's good that when you get here it's ground zero and the winner takes all," Williams said.

"In the field events anything can happen on any given day, so it doesn't matter if you had the best jump last week, this week it can be something else and someone else can be on form, and I'm just hoping that that person can be me, especially with my little mishap at Worlds. I want to make up for that and finish the season strong," Williams added.

Confidence untouched, Williams, who enters the finale as the second-ranked triple jumper behind defending Diamond Race winner Caterine Ibarguen - the World Champs silver medallist - is backing herself to push for the maximum here.

"I am really excited, it's my last meet and usually this time of the year I am tired, but I feel much better. I don't feel as beaten up ... my mind is in it and my body is fine. I'm just hoping [that] when I go out there, I don't just give it away. I am hoping to go out there and fight and finish strong," she said.