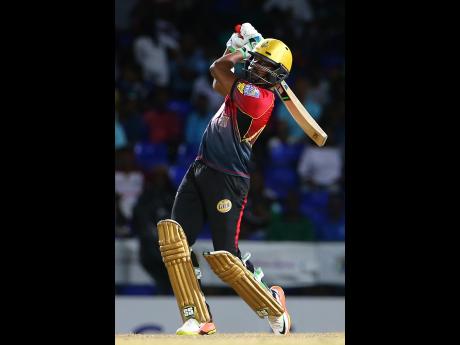 Rapid-fire, unbeaten knocks from Brendon McCullum and Darren Bravo upstaged an explosive 93 from Chris Gayle to lead Trinbago Knight Riders (TKR) to an eight-wicket victory over St Kitts & Nevis Patriots under the Duckworth/ Lewis/Steyn (DLS) Method in the Caribbean Premier League on Wednesday.

McCullum, the former New Zealand captain, was not out on 40, and West Indies left-hander Bravo was not out on 38 as the Knight Riders successfully chased a DLS-revised target of 86 from six overs in a thrilling finish to their rain-affected match at Warner Park.

In an explosive conclusion, McCullum and Bravo smashed one four and eight sixes, sharing an unbroken 54 off 13 balls for the third wicket to catapult the TKR over the finish line with four balls remaining.

The embattled Bravo concluded the showpiece with successive sixes off the first two deliveries of the final over - bowled by Jonathan Carter - to finish the match in grand style and hand the visitors their seventh victory of the competition.

The result meant that the Trinbago Knight Riders remained riveted at the top of the standings on 14 points, three more than the Patriots, with both having two matches left.

Gayle had set the tone for the day with five fours and eight sixes from 47 balls in a typically fiery knock that drove the Patriots to 162 for three from their rain-reduced 13 overs.