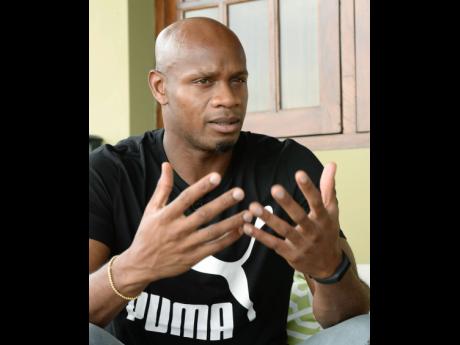 Veteran Jamaican sprinter Asafa Powell said he felt embarrassed by Jamaica's insipid performance at the recent World Championships in London, particularly in the sprints, and is imploring the island's upcoming talent to remain focused and hungry for success.

For the first time since 2005, Jamaica was kept off the top of the podium in flat sprint events, with Usain Bolt's 100m bronze being the only flat sprint medal won at the championship by a Jamaican.

To add insult to injury, no Jamaican qualified for the women's or men's 200m final and there was also no podium-topping finish in either sprint relay events.

Powell, who missed out on competing at the championship because of injury, returned to the track for the first time since his semi-final run at the National Championships in June, finishing seventh in the men's 100m IAAF Diamond League final at the Zurich Diamond League meet last night in 10.11.

"I got a great start, got out the blocks really well, but when I got to halfway, I just didn't have any legs. I couldn't get my legs going. I have not competed for three months, so I was rusty, very rusty," Powell said after his run. "I didn't get over the Achilles problem until, like, two weeks before the World Champion-ships. I was hoping I could even go and run the relay, but I am in good shape now, and being out for three months and coming back and doing what I did here, I am feeling really good."

Powell, who was at the forefront of Jamaica's golden era of sprinting, will turn his attention to competitions in Zagreb and Reiti in the coming days.

He admitted that it was difficult for him to watch the miserable Jamaican performances in London, and believes it will require greater application from younger sprinters if the island is to remain at the top of sprints.

"To be honest, I felt a bit embarrassed because this was the worst World Champs for us in years, and it was an easy Word Champs, so I was a bit disappointed. I expected a lot more, mainly from the younger athletes," Powell told The Gleaner.

"The new athletes just have to stay hungry. We, senior athletes, are at the top, and we are still hungry for it, so the younger athletes should be hungry. I think they got spoiled because they kept seeing us on the podium, seeing us at these Diamond League meets and Olympic finals and got a bit spoiled and, perhaps, think they don't have to work as hard for it, but you have to keep working hard and not allow money or anything to get to your head and just stay focused and humble," Powell preached.